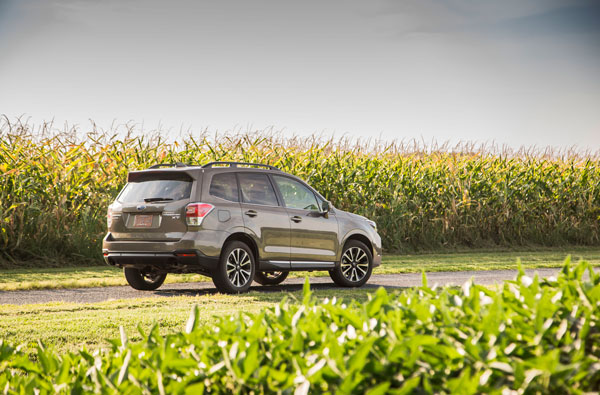 In a sector of the automotive market that leads the way in design and innovation, it could be difficult to remain among the leaders with a car that, at first glance, even something outdated may seem. Some hidden charms must have the Subaru Forester, to survive the clash of models that look more handsome and attractive than he, such as the Jeep Cherokee, Toyota RAV4 or the most gallant of all, the Mazda CX-5.

The square style of the Forester may look a bit old-fashioned, but it brings out good dividends on other features buyers appreciate, such as safety, functionality and off-road capability. There is plenty of cargo space, thanks to the rear with high angle door, and the large windows provide excellent visibility, perhaps the best among all its competitors. Owners also benefit from the Subaru Forester’s large doors, making it one of the easiest cars of any kind to get on or off.

Inside everything is simple, functional and easy to reach, but that is, with extraordinary moderation. Subaru does not boast of luxuries. The interior materials include a blend of soft matte surfaces accented with metallic finishes of the same color. These materials have been upgraded in recent years, from upholstery to door dressing, and this year Subaru adds a perforated leather upholstery with contrast stitching for the Touring finish level.

One of the most frequent complaints about the cabs of many Subarus, including the Forester, has been the noise inside. In its 2017 version, Subaru confronts this issue by adding more acoustic insulation, using thicker glass, restructured door seals, insulation under the floor and an acoustic windshield. The difference in interference of exterior noises of the road and the air, are remarkable if we compare it with the model of the past year.

The standard engine on the 2.5i models is a 2.5-liter, 4-cylinder flat that produces 170 horsepower. The 2.5i model is not so fast, but if with adequate power for a vehicle that weighs about 3,300 pounds. However, when we talk about 2.0XT, the change is evident. That turbocharged, 2.0-liter direct injection increases your horsepower up to 250 and 258 foot-pounds of torque when working with premium gas.

One of Subaru’s most powerful weapons, it’s always been his ability not to stop when weather conditions or terrain thin. A few months ago we tested the Forester along with more than twenty utilities and vans, at the annual event of the Northwest journalists “Mud Fest”. There we saw this car overcoming obstacles along with much more capable, at least on paper, like the Land Rover or Jeeps.

Now, the ability to get away from these tests has been increased with the use of “X-Mode”, a standard distribution system of the traction system. By activating X-Mode, the car will optimize throttle control, AWD, stability and traction control, and descent control to maximize Forester’s low- and medium-speed potential.

The other quality that makes Subaru stand out, and of which the Forester is a good exponent, is its safety. This car has the highest “Top Safety Pick +” rating evaluated by the Insurance Institute for Highway Safety.

The Forester’s safety is now reinforced with technology. By 2017, all Limited and Touring models add blind spot monitors and rear traffic alerts. These features are also added to Premium models, which include the Subaru EyeSight system that detects hazards in the wallet by using a pair of cameras.

There are four main finishing levels. The Base, Premium, Limited and Touring. Premium and Touring are the only ones that are available with the turbocharged four-cylinder engine. The Base model does not offer much beyond the standard features, and it is probably best to look beyond it, should the economy allow it. The two levels that offer the most benefits are the Limited and Touring.

The sale price of the most basic of the Forester, a 2.5i with manual transmission, is just under $ 23,500, including target rates of $ 875. Add summary automatic transmission about $ 1,000. The Touring with the regular engine increases to $ 30,000. The most expensive of all the lineup is the 2.0XT Touring, which brings the turbocharged 250 horsepower engine and starts at $ 36,090.

As for price, the Forester compares very well with the rest of the competition, including the Honda CR-V, Hyundai Santa Fe and Chevrolet Equinox to mention a few. In this segment there are less expensive alternatives, which may include the new Mazda CX-5.

The Subaru Forester is another option within a highly competitive automotive sector, that of compact SUVs. It surpasses the rest by being the only one with four-wheel drive in standard form.

His skills for off-road are more than recognized, respected, but they are not the only reasons to find this car attractive. With its remarkable value of resale, the Forester stands out even more within the fed herd.