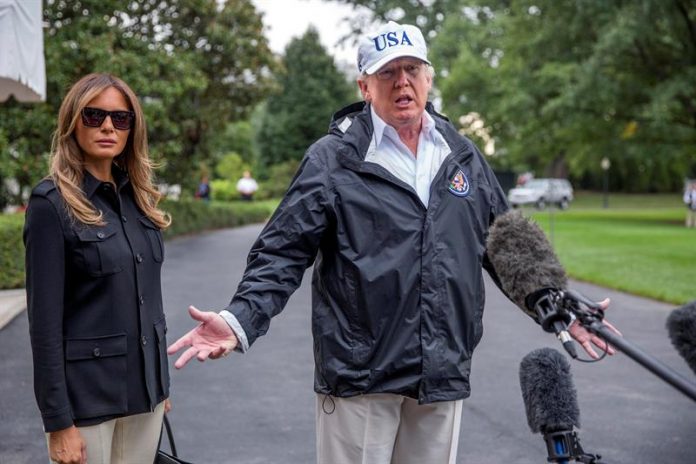 US President Donald Trump toured parts of Hurricane Irma in Florida today as the state tries to return to normal amidst blackouts, collapsed homes, and roads obstructed by debris.

The Republican arrived at Ft. Myers Airport, on the southwest coast of Florida, accompanied by his wife, Melania Trump, and Vice President Mike Pence, and set off southward through one of the areas hit by Irma, which has left on his way through the United States. at least thirty deaths.

Trump considered that Irma caused “a real disaster” and pointed out that “there is much work to be done”.

He highlighted as “incredible” the work of recovery by federal and state authorities in Florida.

Among those killed were nine people living in a nursing home in the northwestern city of Hollywood, which lacked electricity, and therefore air conditioning, and at least eight others in the Florida Keys, in the southern end of the US, the area that was most damaged by Irma.

Under temperatures around 90 degrees Fahrenheit, Trump visited homeless families in the city of Naples on the southwest coast of the state and handed them water and sandwiches in the company of the first lady.

The president assured the victims and the emergency forces that he was “one hundred percent with them.”

The southwest coast and the Florida Keys were the areas most affected by Hurricane Irma, which landed in the state early Sunday morning.

In this succession of islets, where Irma arrived with winds of 215 kilometers per hour (133.5 miles per hour), at least 25% of the houses were destroyed and about 65% suffered considerable damage, according to the Federal Agency of Management (FEMA).

Trump, who did not visit the Keys, spent about three hours in Florida to examine the damage caused by the cyclone, which he called a “monster.”

“Historically there has never been anything like this, but the US Coast Guard, FEMA, working with Governor Scott, has really done an incredible job, electricity is coming back quickly,” Trump said.

At noon today, at least 2.5 million homes, businesses and offices, half a million of them in Broward and Miami-Dade counties, were still without electricity, according to the Florida Office of Emergency Management.

At the Consulate General of Spain in Miami, the Crisis Cell, headed by Consul General Cándido Creis, was in the street attending people who came to collect visas or make inquiries, since the building where the consular headquarters is located is closed because was left without electricity because of the hurricane.

“Today we have delivered so far ten or twelve visas,” said a consular source consulted by Efe.

“We’re going to help Florida,” said Trump, who praised and thanked Scott for the good work he did in response to Irma, a job he described as “outstanding” and which he said is reflected in the low number of victims.

The governor, who announced a $ 25 million federal highway recovery plan, said electric power has been restored to more than 4 million homes.

The president also thanked the US Coast Guard, National Guard and other institutions for their efforts to protect people’s lives, while pledging to help those who have lost their homes.

The Coast Guard has deployed three teams in the Florida Keys today to assess the damage caused by Hurricane Irma in the ports and waterways of this chain of islands at the southern end of the state.

“The three teams deployed will reach the Key West, Marathon and Islamorada area within the next 24 hours,” the agency said.