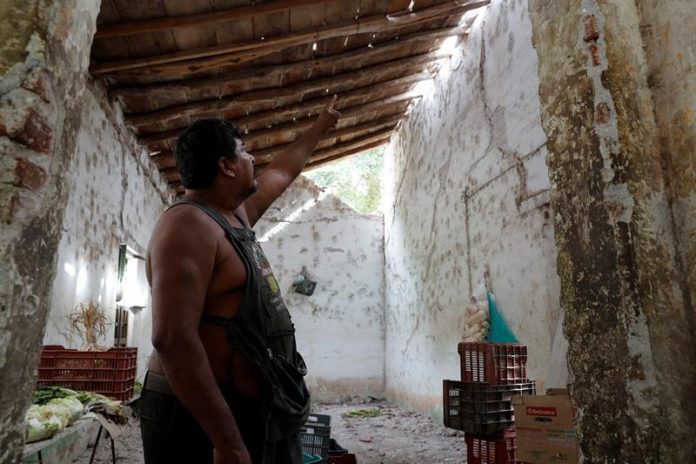 “They say that Ixtaltepec was not damaged, but in fact it was the worst,” explains Efe Gloria Núñez, a resident of this Mexican locality who, like most of his neighbors, denounces the lack of public assistance and presence of the authorities after the great earthquake.

With around 15,000 inhabitants, Asunción Ixtaltepec is another of the populations affected by the quake of magnitude 8.2 on the scale of Ricther last Thursday night, which has left at least 90 dead according to the official count, 71 of them in the southern state of Oaxaca.

Three days after the incident, aid reaches the humble municipality of the Isthmus of Tehuantepec, despite the collapse of many houses, hundreds of victims and several mortal victims.

There is hardly any presence of forces of order, there is no distribution of food and media attention continues in Juchitán de Zaragoza, distant about 10 kilometers and epicenter of the drama when reporting about 60 deaths, in preliminary figures.

“Nothing else focuses on Juchitán, but here we are lacking everything, water, electricity and food.” We need support from the government and the president, “said Nunez, a hairdresser by profession, from one of the damaged homes.

The fear of the trembling remains in many inhabitants of this locality, in which the Zapotec language predominates.

“To the Government I am asking for help, because we are elderly and look at the house we have,” says Juana Mijambo, over 80 but unable to remember her exact age, compared to what remains of her home.

One of his sons, peasant like the rest of the family, says he was at home and was able to get his parents out before the roof of a small porch collapsed.

At age 67, she knows she will have to use her own hands to fix the house. “Lucky that I am still young,” says the man with complete conviction.

The general feeling in this town, that although by the type of low buildings does not look as harmed as the center of Juchitán, is that if they return to the normality will be by their own determination.

“It will take several years” to recover the house, regrets Jose Javier Jimenez while rummaging through tons of debris.

“There are some belongings that belonged to the grandparents, things of the parents, memories. I feel a lot of sadness, here there are many experiences, family stories,” explains the doctor.

In Santiago Niltepec, another municipality in the Isthmus region, Dayanna Gallegos reports to Efe, in a telephone interview, that she does not receive the necessary help either.

“They spent census, but there has been a support as pantries, something that really benefits us,” explains this girl who lost the house where she lived with her mother in this town of less than 5,000 inhabitants, one more that does not appear on the news .

Meanwhile, in Ixtaltepec, a group of women from neighboring Ixtepec, another population of the Isthmus that is less affected, distributes rice with milk, and a group of Adventists give breakfast, consisting of tamales and pot-brown.

A couple in front of a large group, about 20 people, who have nowhere to sleep since the earthquake. The daughter of the couple studies in Tuxtla Gutierrez, in the state of Chiapas, and made a collection. Today he brings them several boxes of food and medicines.

Maria Rosa Lopez, who still brings the scare in the body, remembers that the town was “destroyed in a few moments.” Her home was not affected and therefore is giving way to shelter her neighbors more needy.

“There are people who are homeless, homeless and with children, and now we have no food, we have no water, the light just arrived yesterday,” he said.

Pass a Federal Police patrol and an Army convoy. The latter arouses the interest of the neighbors, as they are distributing water and are, they say, the first forces of order that make a visit.

In Ixtaltepec will distribute about 3,000 bags of water of two liters per unit, explains a soldier to Efe.

“The Army does not support us, it just happens as if it were a parade. What is required of them is that they help us remove debris,” says Óscar Lopez, a peasant who earns about 150 pesos ($ 8.5) a day and he has lost everything.

“Look, Dad, there’s my backpack,” exclaims one of his sons, who, along with his neighbors, helps him with the task of saving some of his belongings.

Shortly after they take out of the ruins a dusty backpack. A small victory in the meantime collapses. Between so much defeat.