Shelter under the hurricane

Only the screaming of children, their careers in the corridors, is oblivious to the tense preoccupation and fear of hundreds of families who have sought refuge from the appalling Hurricane Irma at Felix Varela College in the suburb of West Kendall, southwest of Miami .

Since Thursday, a constant flow of people carrying mattresses, blankets, clothes and household goods has not ceased to reach this school of solid construction, with reinforced concrete walls and ceilings.

It has already exceeded its capacity of reception. Perhaps about a thousand people crowd, tighten and concentrate in the narrow corridors, in the meager and unlikely gaps that are available.

“I have already closed the shelter,” says one of the bilingual Hispanic volunteers who register the refugees who patiently queue at the entrance of the school.

At the end of one of the long corridors, seated on cushions, is the Colombian Luis Vázquez with his wife, of Dominican origin, and his son of three years disguised as a bear and jumping tirelessly.

It is the first time they leave their home because of the fear of a hurricane. “She was the one who pulled me to find a shelter. We lived on a second floor in West Kendall, an area that was hit a lot by Andrew (the 1992 hurricane that wreaked havoc on Miami-Dade County) and did not seem very safe the apartment, “says Vázquez, computer systems engineer.

It is difficult to break through this labyrinthine network of crowded hallways. In one of them rests on a mattress the Venezuelan Zenaida Delgado, 68 years.

To Delgado, Irma surprised her on a short visit to Miami to spend a few weeks with her daughter and see her granddaughter, settled in the bedroom town of Kendall.

“The anguish is going to be great because the wait is long,” says Efe Delgado, who, like Vazquez’s wife with her husband, had to insist on convincing her daughter of the need to seek refuge and not remain alone in the house.

Delgado says he does not forget the wake of destruction and death that left the intense and prolonged rains that devastated the Vargas state of Venezuela in 1999, where between 10,000 and 30,000 people lost their lives because of landslides.

A natural catastrophe that has marked her to the point that, when she knew that Hurricane Irma was category 5 and headed south of Florida, she did not hesitate to drag her daughter and granddaughter to this sheltered school.

Although Irma has weakened today to Cuba and Florida, it is still a category four hurricane of great destructive power, with maximum sustained winds of 240 km / h, according to the US National Hurricane Center (NHC). 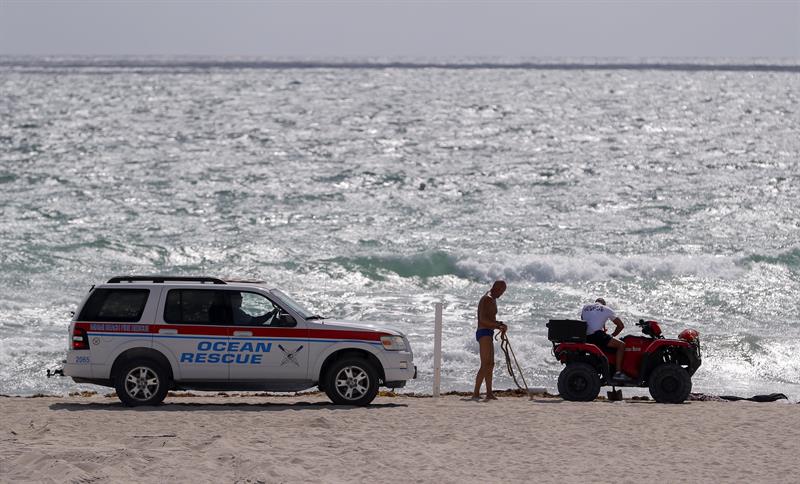 The shelter that the authorities have enabled at the Terra Environmental Research Institute in Kendall offers an environment of greater order and control than in the former refuge.

The chaos and tension that reigns in the first, is absent here. The presence of the Police, the Red Cross and a team of very active volunteers give peace and security. Two volunteers indicate early in the morning to people approaching in their cars that the shelter is already closed. No more people are allowed.

Volunteers and police officers divert the many families who are looking for shelter to another nearby shelter, Jorge Más Canosa, near the town of Homestead.

The classrooms, by order of floors, have already been occupied, as well as the gym, where a young Peruvian mother, Margarita Raso, is with her 14-year-old son and her husband.

The Raso family, who has been living in Miami for ten years, made the final decision to leave their home at the “last minute” because “we were very worried and afraid,” explains Raso, who confesses that his son was really ” “.

There was a moment, last Wednesday, when Margarita pondered the possibility of traveling with the family to Orlando, in central Florida, to stay in a sister’s home, but eventually gave up.

And, as she says, “the thing is ugly and will be in all of Florida, that’s why we did not leave, because the road to the north was also with serious traffic problems.”

The concern and anxiety of Marisa is also for her cat, who had to leave in the house, in the bathroom with water, food and sand, as they do not allow pets in the shelter.

In the same gymnasium, a family of 19 Guatemalans, adults and children, found roof during the hurricane. One of them is Edwin Pachecho, 39, who arrived Thursday with his family and already spent the first night at the shelter.

He acknowledges that he, like the rest of his family, feels “fear and fear because what is seen is great and with something like that you can not play or risk life.”

The US breaks its daily record of infections and deaths from coronavirus: 3,309 deaths and 231,775 new cases

The US health authorities have reported that 3,309 deaths and 231,775 new cases of coronavirus were registered this Friday, which is a historical record...

The Emirates Team New Zealand triumph over Oracle Team USA, which earned him a return to the America's Cup for his country after 14...

Thousands of people protest the “inhuman” treatment of detained migrants

Thousands of people joined more than 180 protests across the country Tuesday to demand the closure of immigrant detention centers and cancel the delivery...

The United States considers that Russia poses "a real challenge to European security" and reiterates that the Atlantic Alliance is not the problem because...

Did the Star of Bethlehem exist?

The Bible says that the Magi followed a star on its journey from the East, which stopped just above the place where Jesus was...