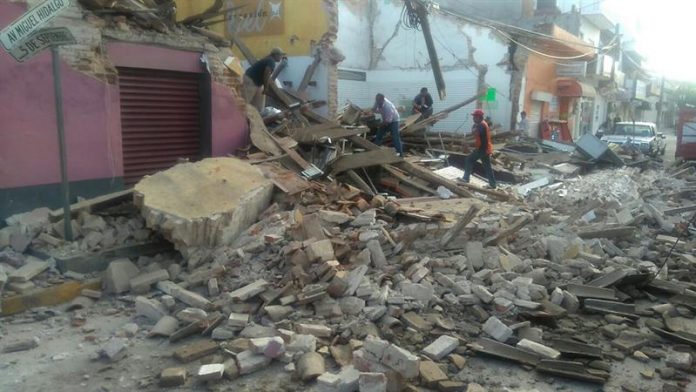 Churches, municipal palaces and other tourist monuments and infrastructures have also been other major affected by the earthquake of 8.2 on the Richter scale that Mexico lived last night and that has affected especially the south of the country.

Juchitán, in the state of Oaxaca, has been the municipality most affected by the earthquake, which surprised the Mexicans at the edge of midnight and caused at least 35 deaths.

The municipal palace of this place was partially reduced to rubble and left a peculiar stamp: the national flag standing between the collapse.

The images of a man rescuing the flag among the rubble has become an unexpected patriotic symbol, in full month of the celebrations for the Independence of the country.

The church of San Vicente Ferrer, dating from the sixteenth century, has been destroyed for the most part, leaving no trace of one of its bell towers.

In the capital of the southern state of Chiapas, Tuxtla Gutierrez, was affected the monument of the Park Bicentenario Morelos.

From the monolith, located at the top of a few steps, the heads of two female figures appeared that appear by shaking hands.

The town hall, a white neoclassical building, cracked in its upper part, while the ground around the church of St. Lucia was plagued by debris after the two towers of its façade, as well as other parts of its structure, suffered damages.

Although the earthquake did not impact on the monuments of Mexico City, in social networks a video became viral in which it is seen how the Angel of the Independence – that with its figure, column and staircases adds about 95 meters – is balanced by the trembling.

Sixty years ago, the earthquake of July 28, 1957 left a striking image: the statue of the golden angel lying on the ground was only part of the destruction that left the phenomenon in the capital, which years later, in 1985, would suffer another earthquake that left thousands dead.

According to the latest data provided by the authorities, last night’s earthquake left at least 35 dead in the south of the country, 25 in the state of Oaxaca, 7 in Chiapas and 3 in Tabasco.