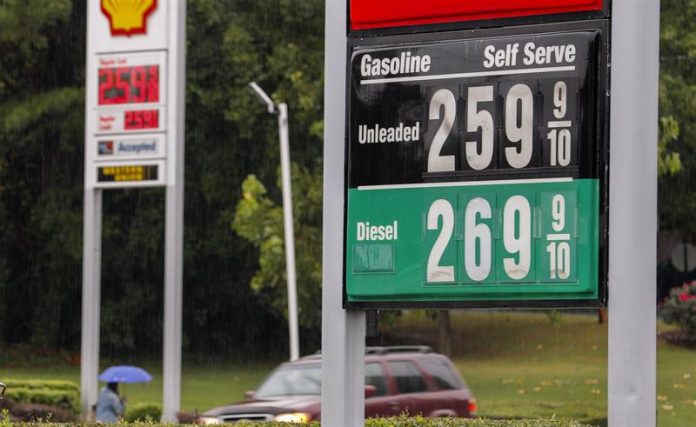 The average price of gasoline continues to rise in the US. after Hurricane Harvey, and the country’s two largest refineries off the coast of Texas are still closed, and has already surpassed $ 2.63 per gallon ($ 3.78).

The figure is an increase of 26 cents, or 10%, compared to a week ago, according to data from the American Automobile Association (AAA) that tracks the cost of fuel throughout the country.

“Consumers will see that prices will skyrocket in the short term (…) But do not expect refineries are closed for months, and early reports indicate minor damage in Corpus Christi and Houston,” said Jeanette Casselano spokesman the AAA.

Casselano expects that the cost of fuel will start to stabilize and fall from next week.

For now, however, the two largest US refineries, Motiva, of Saudi capital in Port Arthur, and the one in Baytown, near Houston, of ExxonMobil, are still closed today.

Between them they have a refining capacity of more than 1.1 million barrels of oil per day.

Exxon Mobil said this week that the first evaluations point to only “minor damages” and said it expects to start resuming operations on Tuesday.

Motiva, for its part, has not offered a date for the resumption of its operation.
Hurricane Harvey, which has caused more than 32,000 displaced people in southern Texas and killed more than 50, has left strong winds and rains that have caused catastrophic flooding.

It affected with particular force the region near Houston, the heart of the US refining industry, which is expected to take a few weeks to resume normalcy in the oil and gas markets.

In addition, the Colonial pipeline, known as “fuel the Mississippi River” and linking Texas to New Jersey, also had to interrupt his flow of fuel to the northeast by the sheer magnitude of floods,
Colonial, which has the capacity to transport more than 2 million barrels of gas per day and supplies the markets of New York, Washington and Atlanta, among others, hopes to reopen the flow tomorrow.

About 25% of the refining capacity of the country has been paralyzed by the devastating passage of Harvey, the most powerful hurricane to hit the United States since 2005, when Katrina devastated New Orleans, and the largest in affect Texas since 1961.