The western Mexican state of Jalisco today achieved the Guinness record in the world’s largest guacamole, making 2.98 tons of this typical dish of Mexican food in just 90 minutes.

“They made 2,980 kilograms by imposing a new world record. We take into account weight and other sanitary measures, such as safe food handling,” said Carlos Tapia Rojas, the winner of the Guinness record for Mexico and Latin America.

The previous mark was 2.66 tons and was imposed in 2015 by the state of Michoacán.

Tapia added that records related to guacamole are “among the most disputed” in the United States and Mexico, where the dish is very popular and in which several states of the country have tried to impose their own brand.

The preparation of the dish took place as the main square of Concepción in Buenos Aires, a town in southern Jalisco known for its aguacateros fields, where hundreds of people came to witness the feat.

About 1,550 inhabitants and students from 14 schools of gastronomy collaborated in the preparation of this dish cutting 4,200 pieces of avocado, a fruit that is cultivated mainly in the south and southeast zones of Jalisco, state that occupies the second place in aguacatera production in Mexico.

To elaborate the traditional recipe the participants also cut 3,500 pieces of tomato, 750 balls of onion, 90 bunches of coriander and squeezed the juice of 3,000 lemons; the ingredients were mixed in a large bowl under the supervision of the Guinness Record Officer.

The secret to achieving a good guacamole is to ensure the maturity of the avocado and prevent its oxidation during the process, says Antonio Curto, executive chef for the elaboration of this dish.

“The level of maturity is superimportant, if the avocado is hard it can not be ground, if it is completely soft, it is black and it is difficult to handle it,” explains the chef.
He adds that the taste also depends on the order of the ingredients, so they first placed all the avocado pulp and lemon to prevent their oxidation and then the onion, tomato and cilantro, seasoned with salt.

Agile and quick, the cooks cut the ingredients that were then deposited in a large container, where a dozen chefs were scrambling them with metal shovels over a meter high.

The aromas of food attracted hundreds of people who gathered in the square to taste the flavor of this guacamole, which was served with toast, totopos (pieces of fried corn tortilla) and crackers.

During the ceremony, the governor of Jalisco, Aristotle Sandoval, said that in the last four years the state went from producing 40,000 tons of avocado a year to 146,000 tons.

Globally, Jalisco ranks fifth in Hass Avocado production, surpassing Spain, Israel, South Africa and Australia, equating to California (USA) and near countries like Peru and Chile, according to the World Association of Producers of Avocado. 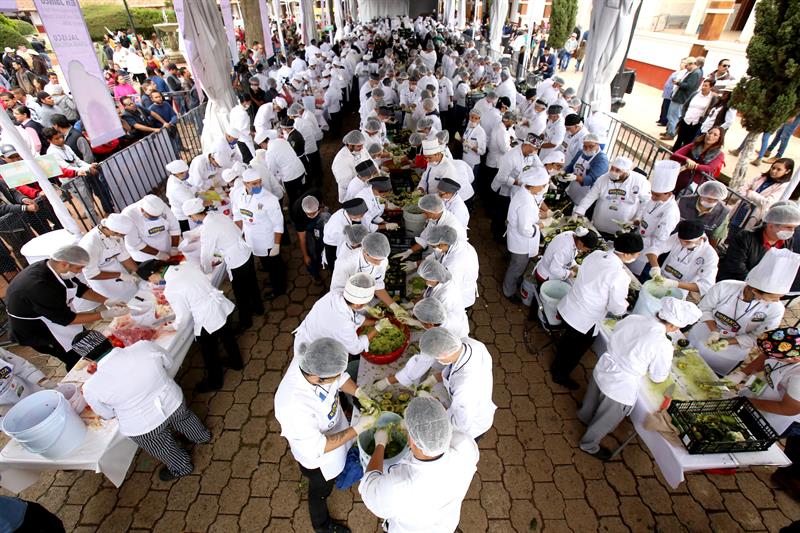