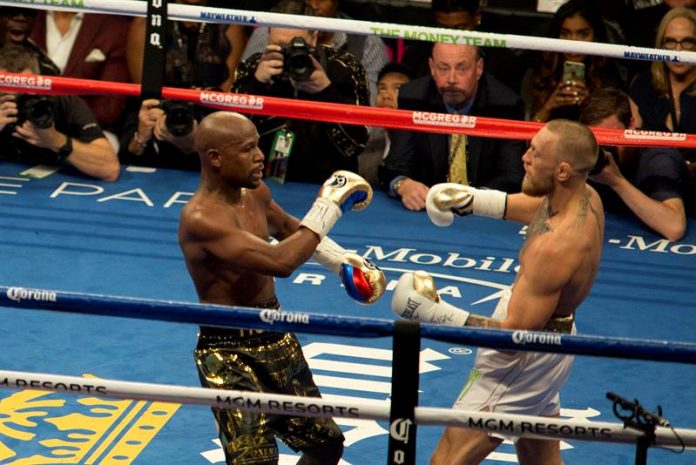 The referee of the fight, the American Robert Bird, who was just as bad that the two fighters, allowing to McGregor all sorts of illegal blows and fights, decided to stop the “esperpento” of combat when it took 1:05 minute of the tenth assault.

By that time Mayweather junior was already in control of the cards of the three judges of the fight after having allowed to win the first three by doing nothing about the ring mounted at T-Mobile Arena in Las Vegas.

But despite having played with McGregor, who was worse than a sparring over the ring, and all the fans who decided to pay thousands of dollars, although the capacity of T-Mobile, Mayweather junior did not fill up after the “farce” Of combat said that “a victory is a victory, no matter how you get it”.

He got it in the most humiliating way for the sport of boxing, against an opponent who did absolutely nothing good on the ring, did not have speed, did not move his feet, the less he knew to place a single blow of power with which threatened that he was going to Destroy the “old” Mayweather junior.

None of that happened, on the contrary, was fulfilled all that had advanced the experts and professionals of the world of boxing, that the fight was a “nonsense” for the image and history of the sport.

But the Nevada Athletic Commission decided to authorize it with the sole purpose of obtaining significant income, which in the end may also be more than questioned as to the gaps seen in the tiers of T-Mobile.

So we will have to wait to see what are the pay TV sales, which could also leave unpleasant surprises for the organizers.

“No matter what they think of the fight, I owed the fans a good show after the fight I did against Manny Pacquiao,” said Mayweather junior, who this time if, after returning from his voluntary retirement for the second time in His career, said it had been the last bout.

“Ladies and gentlemen, this was my last fight,” said Mayweather junior as soon as he finished the fight against McGregor, who placed 170 strokes with combinations that the Irish fighter did not know where they came from, which always looked like a real ” Doll “in the ring.

Meanwhile, McGregor said he was “satisfied” with the way he fought and complained that referee Byrd would not let him hit Mayweather junior when he was better in the fight.

“They should have let me keep doing it, given that there was when I cut the inertia of the fight,” McGregor said. “In the end I won because I made him fight like a Mexican, giving everything.”

The scheduled 12-round junior-middleweight fight as anticipated by the experts in the sport of boxing was a complete disappointment also for fans for what both fighters offered.

In addition, it started late because of the problems that had the organizers with the transmission of the pay television by the chain of Showtime.

In the end, the only thing Mayweather junior, 40, was interested in, which was to keep unbeaten as a pro, he managed to make his mark at 50-0, with 27 KO’s, the best of all time by beating Rocky Marciano (49-0), with which he was tied.

Many believed that if it was already “ethical” to face a mixed martial arts fighter who had not done a single boxing match, more would be if he finally counted the fight for his mark.

None of that mattered to Mayweather junior, nor that from now on he is remembered as the fighter who being on top and having proven himself to be among the best of all time, in the end “betrayed” the integrity of the sport of boxing .

Mayweather junior as expected in the “grotesque” fight they set up to win millions of dollars, was always superior and only in the first three rounds, when intentionally did not want to do anything in the ring let McGregor put them in his account.

The win left Mayweather junior with an insured bag of $ 100 million, while McGregor, 29, took another $ 30 million.

Both could increase them considerably on the basis of the revenues that may be generated by the sale of pay-TV rights.