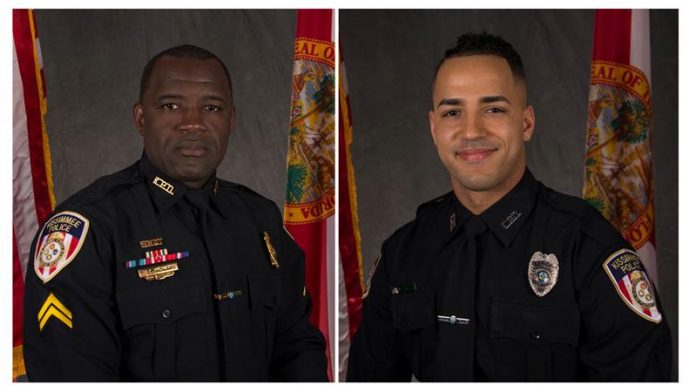 Police in Kissimmee reported the capture of the main suspect in the deaths of two police officers in this central Florida city, who were shot dead during a Friday night shootout.

According to the chief of police, the agents responded to a suspicious activity notice at 9:30 local time Friday in this town south of Orlando.

Almost as soon as they arrived there was a shooting during which they had no opportunity to respond to the shots, O’Dell said.

Baxter died Friday night, while Howard was transported to a local hospital where he was killed late this afternoon by gunshot wounds, the Kissimme Police Department said in a statement.

The suspect was arrested in a bar with two firearms several hours after the attack and is the only one arrested on charges of this incident.

Following the attack on the agents, both parents, US President Donald Trump, sent their condolences this morning through a message on their Twitter account.

“My thoughts and prayers are with the Kissimmee Police and their loved ones. We are with you!”

In Jacksonville, Florida, two officers were also gunned down late Friday after the Kissimmee incident, after responding to a call about a suicide attempt inside a home where they feared For the life of three people.

According to Mike Bruno, director of the Jacksonville Sheriff’s Office, an exchange of gunfire between the officers and a man armed with an assault rifle, who was shot dead while the officers were injured, The stomach and the other in the hands.

Florida Gov. Rick Scott today condemned the attacks on the uniformed officers, including two officers wounded during an incident in Pennsylvania, and called Baxter a “hero” after his death.

“Last night’s violence against our law enforcement community is reprehensible and has no place in our state. Florida has zero tolerance for violence and we will not accept hatred for a second,” said Scott, who promised a swift action Of Justice.