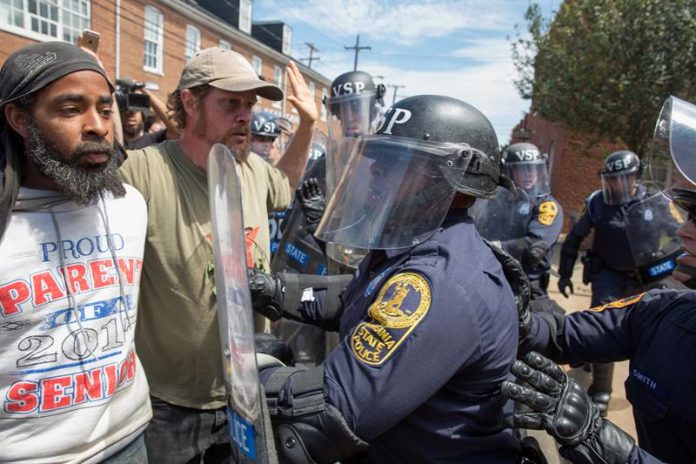 The rise of extreme right-wing movements in the country, with the recent episode of racist violence in Charlottesville (VA), has put the American Civil Liberties Union (ACLU) in the face of a complex dilemma for its traditional defense of Freedom of expression without regard to ideologies.

“If white supremacists marched in our cities armed to the teeth and intent on doing harm, they are not pursuing an activity protected by the US Constitution,” the ACLU in California explained this week.

According to the group’s state affiliate, considered a bastion of the progressive left, “the First Amendment (which protects freedom of expression) should not be used as a shield or sword to justify violence.”

The communiqué was issued several days after the racist rally in Charlottesville where a violent riot broke out a week ago and a 32-year-old woman, Heather Heyer, who protested against the racist march, was killed when she was run over by a neo-Nazi assistant .

This is not the first time the ACLU faces this problem.

In 1934 he stated that he would protect the freedom of expression of the Nazis in the United States at the height of Adolf Hitler’s National Socialist regime in Germany.

“We do not choose our clients,” said the council of the organization, historical reference of the American left.

Later, in 1978, the group defended before the courts that the First Amendment protected a group of neo-Nazis who wanted to parade through the streets of Chicago with swastikas and other Nazi symbols in a Jewish neighborhood, and in recent decades has defended in different Occasions to the Ku Klux Klan in the south of the country.

Precisely during the call of the Charlottesville march under the title “Unite to the right”, and that had the objective of supporting the statue of the general of the confederate Robert Lee in a square of the city, the ACLU put of the Side of the racist supremacists when considering that they could not be curtailed their right to freedom of expression.

However, the tragic turn of events, with violent clashes between supremacists and anti-racists, and the deadly outrage of opponents in which in addition to the deceased, a score more were injured, may have marked a turning point in the 97 years of History of the ACLU.

“What happened in Charlottesville requires a sharper review,” Anthony Romero, the agency’s chief executive, said Thursday after issuing a statement from the California subsidiary.

“If a protest group insists, ‘No, we want to be able to carry loaded weapons.’ ‘Well, then we do not have to represent them, they can find someone else,” Romero added in a press release.

The decision came as the ACLU gained increasing support following Donald Trump’s victory in the 2016 presidential election, fueled by aggressive rhetoric and controversial proposals such as banning US citizens from entering the country Countries with a Muslim majority.

After Trump’s victory, the membership of the ACLU has nearly quadrupled to 1.6 million and the citizen rights group has received more than $ 83 million in donations.

“We’ll see you in court,” said the ACLU after Trump came to power.
This group was also the one that brought to the courts the Muslim veto of Trump, and obtained the temporary block of that norm, although afterwards the Supreme Court partially accepted the proposal of the trustee while the high magistrates study in depth the subject and they pronounce a final judgment about the topic.

However, Romero kept the door open to continue his legal defense of far-right groups “when they express themselves in a non-violent way.”

“We believe that even detestable hate speech, with which we are in vehement disagreement, deserves the protection of the First Amendment,” he added.

But at the same time, he added, “we will take these decisions on a case-by-case basis,” and the “horrible events in Charlottesville will of course set our course forward.” Efe