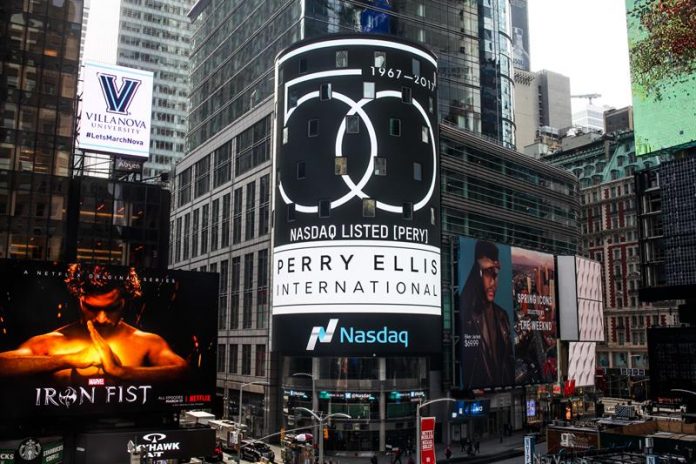 The New York Stock Exchange bell will ring on September 13 to celebrate the 50th anniversary of the Perry Ellis International group, founded by George Feldenkreis, a Cuban of Ukrainian origin who was known as “the king of the guayabera” and today commands alongside His son brands like Jantzen, Penguin or Cubavera.

Feldenkreis, founder and CEO of Perry Ellis International (PEI), as it is known since 1999 the group created from Supreme International, declares himself “proud” to have been born in Cuba and to be “Hispanic”, according to Efe Miami.

Accompanied by his son Oscar Feldenkreis, since 2016 CEO and president of PEI, the founder reviews the first 50 years of a Miami-based business emporium, has been listed on NASDAQ since 1993 and made sales by Value of $ 3.1 billion in the last fiscal year.

“We are going to reach 100 years with the favor of God,” says Oscar Feldenkreis, who believes that growth will come by the international market rather than the national and increasingly by e-commerce, which today represents a 12 % Of PEI business.

Europe, Latin America, especially Mexico, and Canada are the areas where it sees more possibilities of expansion for a group with 71 own stores and more than 90 under license.

Although in the United States even big chains like Macy’s and JC Penney are closing shops, Feldenkreis son thinks that “people will always buy clothes”, especially when there are new products that make them feel “happier and more youthful”.

“If one does not change with the needs of the consumer, it has no future,” adds PEI CEO, a group that in fiscal year 2017 had revenues of 861 million dollars.

The Feldenkreis family owns 25% of PEI’s shares, making it the majority shareholder.

George Feldenkreis says that family businesses are a blessing if you combine the head of the family with the vision to create something that will last and your children have the intelligence and the ability to carry it forward.

At the age of 82, he is still active and enjoys activities outside of Perry Ellis, especially to be a member of the University of Miami Council (UM).

“The central problem is education,” he says when asked about the future of Americans in general and Hispanics in particular.

Although he thinks that only by the number they have reached have a bright future, this veteran entrepreneur, who was a pioneer in ordering clothing in Asian countries, starting with Japan, where he produced in the 1960s guayaberas for the market Puerto Rican, warns that Hispanics run the risk of falling behind if their educational patterns do not change.

That is why he urges Hispanic parents to tilt their children toward science studies. There is “a huge shortage of engineers” and the future lies in “computers, in robots,” he says with conviction.

“If we do not adjust education to what is going to be the future”, “we will always be relegated,” says this son of Ukrainians who graduated from the Centro Asturiano de La Habana and years later studied law with a scholarship.

Based in Miami since 1961, Feldenkreis began his business career as a motorcycle spare parts supplier for a New York company.

These pieces were bought in Japan, where he began to travel regularly and where he also began to buy school uniforms and guayaberas on behalf of his brother, who had settled in Puerto Rico.

That was the germ of Supreme International, which gave rise to PEI in 1999, one of whose strengths is today the clothes to play golf.

Feldenkreis recalls how he switched from an Asian country to the guayaberas that gave him the title of “king” in search of the best at a lower price. So it passed from Japan to South Korea, then to China and now to Bangladesh.

85% of the clothing that PEI sells today is made in Asian countries, although it also produces in Mexico and Honduras and in Arab countries that sell to the US. Without taxes, such as Jordan and the United Arab Emirates, underlines the group’s founder.

“I am very proud of my Hispanic roots, and everyone in Miami knows me as such, and they invite me to many places, looking for a Hispanic who speaks a more or less decent English,” he says humorously.