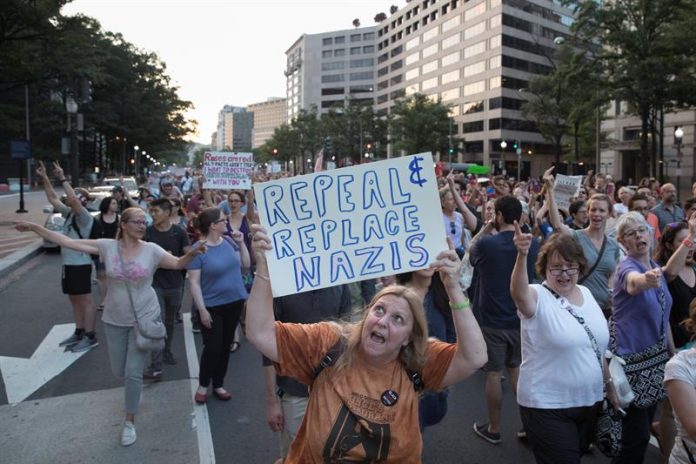 “Ku Klux Klan” (KKK), “neo-Nazis”, “white nationalists” or their younger brand, “alternative right.” The US supremacists are grouped under different names but converge on an idea that gains ground in the era of Donald Trump: the country belongs to them.

Hundreds of these extremists marched with torches and Nazi chants in Charlottesville, Virginia on Friday, on the eve of a protest convened by Jason Kessler, a new figure of white nationalism, against the withdrawal of a statue of Confederate General Robert E. Lee.

“The main reason for the protest is the statue, it is white genocide, the replacement of our people, culturally and ethnically,” Kessler said in social networks hours before the meeting, fueling the fear with which they attract new followers: The growing diversity of the country threatens Christian white culture.

To defend the monuments to the Confederation, at least 700 in 31 states, has become common horse of battle of the groups supremacistas, that have made of these statues and sources the epicenter of its calls.

“They believe that these monuments are part of the white and southern heritage and they want to preserve it, while those who ask to withdraw them believe that they are a symbol of African-American oppression,” Marilyn Mayo, an investigator of extremism in the Anti-Defamation League, Historical NGO in the fight against anti-Semitism.

The other reason the movement against the withdrawal of the Confederate symbology has been theirs is because they know that being in those protests guarantees them a media coverage that they would otherwise not have.

“Most people do not look for extremist groups on the Internet, but their interest in them grows if they come out on the news, their aim is to appear in the media and that potential supporters search for them in the network. To be seen and recruit new members, “Andrew Selepak, a professor at the University of Florida and an expert on Internet use by the KKK, told Efe.

This five-day controversy over President Donald Trump’s ambiguity toward these groups has given them a constant media exposure: their names and symbols 24 hours a day on television, radio, print and digital.

“Every time Trump talks about the subject, another cycle of news opens, another full day of free publicity,” says Efe William. “I’m convinced that the more press you give, the better it will go. Fulton, an expert on extreme right-wing domestic terrorism.

The president, unlike Attorney General Jeff Sessions, has avoided calling the “Saturday bombing” “domestic terrorism” when a young Neo-Nazi white man killed a young woman and injured 20 people protesting against the supremacist rally.

His surprising words of yesterday, equating those who participated in that march with those who came to reject his racism, were widely celebrated in social networks by the supremacists, who again grabbed headlines when his perhaps best known figure, the ex-leader of the KKK David Duke, thanked Trump for his condemnation of “left-wing terrorists.”

The number of white supremacist groups has grown in the US since the turn of the century in the face of demographic projections that white people will no longer be the majority in the country by 2040, according to a report by the Southern Poverty Law Center (SPLC). Studies in more detail the extremism in the nation.

That increase accelerated in 2009, when the first black president, Barack Obama, arrived in the White House and has rebounded in the last two years “partly because of a presidential campaign that flirted with extremist ideas,” the document said.

“The rebound is tied to Trump’s victory, and these groups believe they share their ideas about curbing non-white immigration and stopping globalism,” said Mayo.

Fulton believes that the numbers have not changed as much as the visibility of these groups, at the center of the national political debate after half a century relegated to marginality.

“What we are seeing is an increase in advertising, and that many groups that were not previously associated join now in the causes they consider common because of their shared vision of the moment the Trump Administration represents for them,” he explains.

His new slogans confirm that will: “Joining right” was the name of the Charlottesville protest, a show of strength of white supremacism whose images evoke the darkest moments of racism in America.