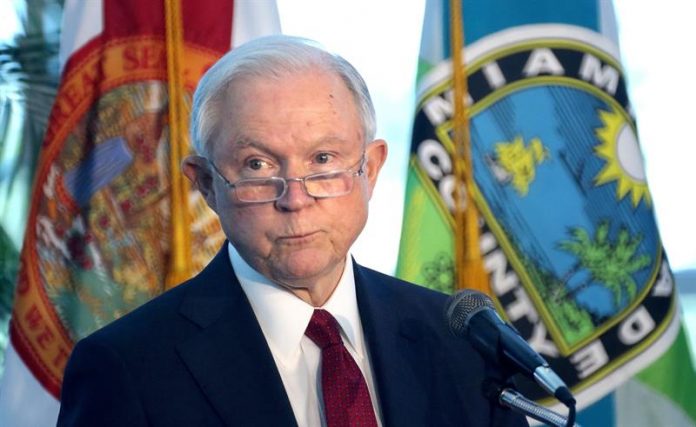 Attorney General Jeff Sessions urged local authorities today to follow Miami-Dade’s example of “punishing and not protecting” criminals during a speech in Miami in which he widely criticized Chicago.

In front of dozens of local police, the prosecutor lashed out at so-called “sanctuary” cities, those who refuse to cooperate in voluntary immigration programs, including Chicago and San Francisco, and blamed them for crimes committed by undocumented immigrants.

Sessions, who was on the podium at the port of Miami accompanied by Giménez, followed those of the interim director of the Immigration and Customs Enforcement (ICE), Thomas Homan, and the demands of pro-immigrant groups, who protested Minutes before near the maritime terminal.

After thanking Miami-Dade County and Mayor Carlos Gimenez for their full cooperation with immigration, Sessions lamented that Chicago chose to sue the Department of Justice (DOJ) this year for cutting federal funds applied to “sanctuary cities.”

During the speech, the Republican assured that the city of Illinois preferred to take “a political position” instead of guaranteeing the “security” of citizenship.

The prosecutor rejected earlier this month that Chicago Mayor Democrat Rahm Emanuel filed a lawsuit against his department for withholding $ 3.2 million to equip his police officers in compliance with Donald Trump’s policy of reducing federal funds To the jurisdictions “sanctuary” ·

In that sense, Sessions recalled that the Government will not allocate resources to “those local authorities that do not offer security to its citizens” and recalled that the commitment that he made with Trump was “to reduce crime in the United States.”

The prosecutor noted that during the holiday of Independence Day, on July 4, in Chicago, there were one hundred shootings and fifteen deaths, while in Miami they were “zero.”

Meanwhile, the mayor of Miami-Dade, who did not speak to the public during the event, said through his spokesman Mike Hernandez that he had previously privately filed with the District Sessions the county’s policies to reduce delinquency and his support for That immigration reform be carried out.

Giménez has been criticized for his full collaboration with immigration and crossed out of turning his back on the immigrant community of Miami-Dade, which has a population in which 60% was born abroad.

Sessions praised during his message to Miami-Dade, who last January, a few days after Trump’s inauguration, pledged to comply with the detention orders issued by ICE.

These orders require prolonged holding of undocumented persons, despite the fact that these mandates have been considered “a violation of the civil rights of the people” because they lack a judicial order, “the American Civil Liberties Union (ACLU) lamented today in Miami.

However, prosecutor Sessions noted that “there is no evidence” of crime reduction in these jurisdictions, “on the contrary.”

For this he mentioned several cases in which undocumented immigrants committed crimes after the refusal of cities “sanctuaries” to deliver them to the immigration authorities.

“In Chicago, a city with almost exactly the same population of 2.7 million people as Miami-Dade, more than 433 people have been killed since the beginning of the year.” More than three times more than Miami-Dade, said Sessions .

Congressman for Florida Ted Deutch, however, responded to Sessions’ visit urging him to “use the Justice Department to go after white and neo-Nazi supremacists instead of pursuing their political opponents,” referring to violence Unleashed last weekend in Charlottesville.

Last Saturday young white supremacist James Fields killed a woman by ramming her vehicle into an anti-racist demonstration in that Virginia city.