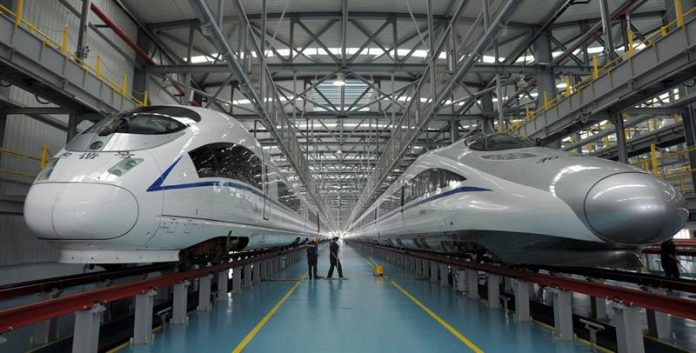 The Texas-based bullet train company, which will join the cities of Dallas and Houston in a one-and-a-half-hour journey from 2023, announced today that two US companies will be in charge of railroad design and construction.

Fluor Enterprises of Irving, Texas, and Lane Construction Corporation, based in Connecticut, were chosen to take over the operation of the high-speed passenger train line, today announced Texas Central Partners, the company that drives a project valued at More than 12,000 million dollars.

The choice of these two companies comes three years after the start of this plan, which will be financed by private investors after Texas Central pledged not to seek public money.

The train will reach 330 kilometers per hour to achieve a journey of 385 kilometers that usually takes about four hours by road in only 90 minutes.

According to Texas Central, the operation and technology systems of this new transport will be based on those of the bullet train that connects the Japanese cities of Tokyo and Osaka, in order to guarantee the safety of users and the speed of service.

The construction of this bullet train will mean the creation of 10,000 jobs per year – it is expected to be built from the end of 2018 to 2023 – and a thousand permanent jobs.

The companies, both with decades of experience in their respective engineering and construction fields, were selected in part because of their ties to Texas projects, Central Texas president Carlos Aguilar said in a statement.

In fact, both companies have worked on the design and construction of highways and public transportation in the southern state.

Lane Construction is a subsidiary of Italy’s Salini Impregilo, which has built rail systems in Italy, Denmark and the Middle East, according to its own website.

“We look forward to being part of the next generation of sustainable infrastructure and a project that will generate benefits for generations to come while providing an innovative transportation alternative for Texas travelers,” said Robert Alger, president and CEO of The company based in Connecticut.

Although this announcement is a step forward, Central Texas is waiting for a federal environmental process needed to proceed with the next phase.

The company also continues to face opposition, especially in rural Texas, where some landowners remain firm in not selling their land, and local elected officials have said the project offers “little benefit.”

The urban areas of Dallas-Fort Worth and Houston are the sixth and seventh most populous of the United States. With 5.1 and 4.9 million inhabitants respectively.