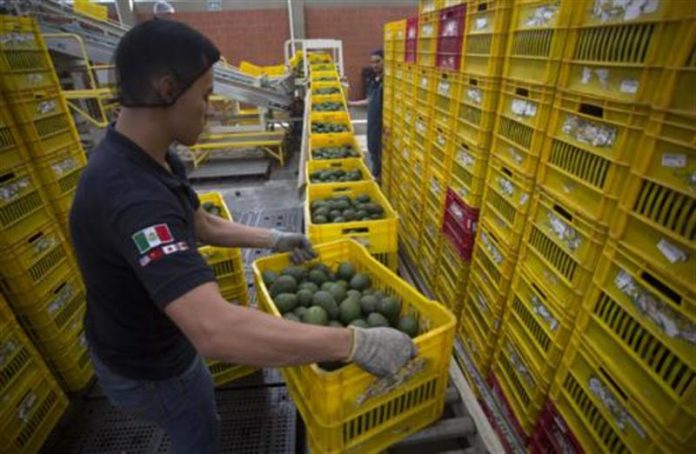 Mexican exporters of avocado and beef boast stratospheric figures when they talk about sales to the US, two success stories coupled with NAFTA, which in a few days will begin to renegotiate amid uncertainty.

“Mexico’s avocado towards the United States is an exemplary case of the benefits of foreign trade,” Ramón Paz, the strategic advisor of the Association of Producers and Packers Exporters of Avocado of Mexico (APEAM), said in an interview with Efe.

The 20-year APEAM coincides with the arrival of Mexican avocados to the US, a “non-direct consequence” of the North American Free Trade Agreement (NAFTA, in effect since 1994) that the White House chief, Donald Trump, wants to reform because he believes it harms the industry and employment of his country.

The trade agreement opened the door, but it was not until a mechanism of solutions of barriers and pest control was established that arrived the first cargo of this green delicacy, of which Mexico is the first producer in the world.

From 1,000 tons that first year, today about 800,000 tons of Mexican avocados are sold in the United States.

With the treaty, Mexican avocados, a national emblem, reach the northern neighbor without a tariff – one of the most problematic issues for Trump – and throughout the year.

They have become a typical food for the neighboring country. Each year, as if it were a ritual, during the celebration of the Super Bowl 35,000 tons of Mexican avocado, normally prepared as guacamole, are consumed.

The benefits are bilateral, Paz said. The Californian producer, who came to oppose the opening, has seen how they were paid more per kilo.

According to the APEAM, there are 19,000 jobs in the United States that depend on Mexican avocados; Are $ 1.2 billion in wages and $ 600 million in taxes.

In Mexico, the industry boosts the development of states such as western Michoacan, where it generates 70,000 permanent jobs and about 300,000 temporary jobs.

This region, one of the poorest in the country, produces most of the fruit, and is the only one that has all the permits to sell to the United States.

Before the renegotiation of the NAFTA, Paz requests that it continue “without tariffs and without quotas”, with greater reciprocity in the control of phytosanitary measures and “more agile” supervision mechanisms.

In addition, the possibility of exporting avocados to the US should be definitively expanded. Coming from all over Mexico.

And because of the importance of the fruit on both sides of the border, which is not used as a “currency of exchange” to negotiate other agricultural products.

On the other hand, Mexican beef summarizes the dynamics of international trade very well; With winners, losers and many vicissitudes before the success.

“When NAFTA was negotiated, we were one of the sectors that were totally against trade liberalization,” Mexican Beef Exporters director Rogelio Pérez told Efe.

At first, the sector “suffered”, lost jobs and were discarded investments, he recalled.

After a few years of adaptation, and specializing in the sale of fine cuts benefited by a zero tariff, today the expansion is vertiginous. Of about 28,000 tons exported to the United States in 2006, they now exceed 180,000.

These represent about 90% of sales abroad, further proof of Mexico’s dependence on the United States.

But there are still issues that can be solved in the negotiation of NAFTA, which starts on August 16 in Washington D.C.

For example, inspection facilities of the Mexican product in the United States and greater access to Canada by road from the United States. “This is a very complicated process, not standardized,” Perez lamented.

With 1.1 million direct jobs and 4 million indirect, cattle farmers are one of the success cases that the Executive emphasizes when speaking about the agri-food sector.

On the other hand, there are thousands of small farmers who cultivate basic products like corn and beans that are against the treaty and demand that the agricultural chapter of the treaty be eliminated.

According to official data, the commercial exchange of agri-food products between Mexico and the United States was 42.785 million dollars last year, and since 1994 grew 9% per year on average.