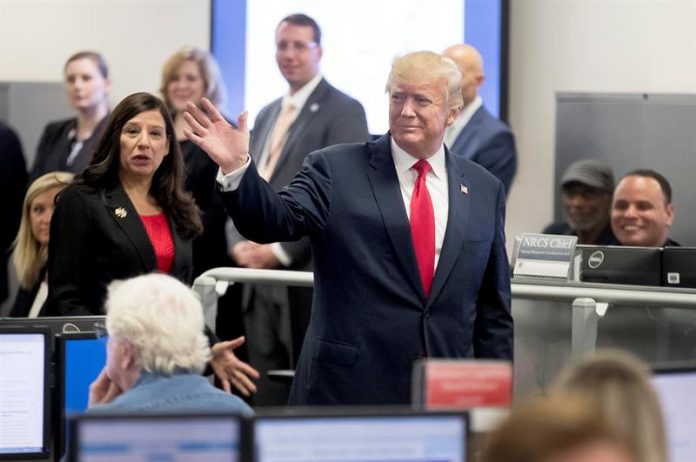 The United States today celebrated the statement signed Tuesday in Lima by twelve foreign ministers from throughout the Americas and called on the governments of the continent and the world to take “strong measures” against those who undermine democracy or violate human rights in Venezuela.

“We welcome the declaration made by twelve American nations in Lima, condemning the rupture of the democratic order in Venezuela. We applaud Peru and others for their leadership in the region in relation to Venezuela,” a spokeswoman for Efe Latin America of the State Department, who requested anonymity.

“We continue to urge governments on the continent and around the world to take strong measures to force all persons who undermine democracy, violate human rights, bear responsibility for violence or repression, or become involved In corrupt practices, “the source added.

The United States imposed sanctions on eight officials implicated in the National Constituent Assembly (ANC), including Adán Chávez, a brother of the late President Hugo Chávez.

Donald Trump’s government had promised to impose new sanctions if the ANC took office, as it happened last Friday, but Washington decided to wait to see the outcome of the meeting in Lima before announcing its new round of restrictions.

At that meeting, twelve foreign chancellors from all over America – including those from Brazil, Peru, Argentina and Mexico – reaffirmed that they will not recognize any decision made by the Constituent Assembly and that it is not endorsed by the opposition majority parliament, Legislative power of the country.

The foreign ministers and representatives also called not to hand over or sell weapons to the government of Nicolas Maduro who accused of breaking “the democratic order in Venezuela.”

The United States did not participate in the Lima meeting to prevent its presence from complicating the meeting – given President Maduro’s accusations of Washington interference – but the meeting was “conversed” and “coordinated” at all times with the authorities in Washington, According to Efe Peruvian diplomatic sources.

The Peruvian Government, which organized the meeting, had previous consultations with the undersecretary of State for Political Affairs, Thomas Shannon, and with representatives of Spain and the United Kingdom.

In Venezuela, a series of demonstrations for and against the Government have been registered since April 1, which have left more than 120 dead, a situation that has intensified since the installation of the Constituent Assembly, which is not recognized by the opposition or by Several governments and international organizations.