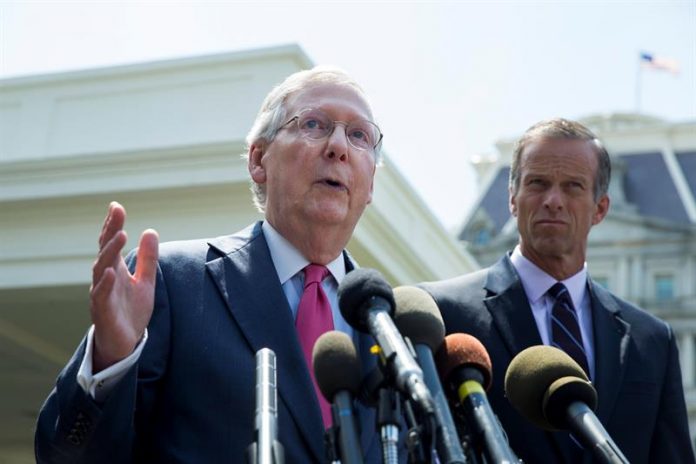 US President Donald Trump went a step further in his criticism of Senate Majority Leader Mitch McConnell and blamed him for the failure of the party’s attempt to replace the health reform promulgated by former President Barack Obama Obama.

“Obamacare may have been repealed and replaced by Mitch McConnell, who has been screaming ‘repeal and replace’ (health reform) for seven years,” Trump tweeted, using the name popularly known as ” Health law of 2010.

His message came a few hours after another tweet in which Trump also lashed out at McConnell for saying the president had “excessive expectations” about his party members’ ability to outdo the Democratic opposition and quickly pass a bill to replace Obamacare .

“Senator Mitch McConnell said that I had ‘excessive expectations’, but I do not think so.” After seven years of hearing ‘repeal and replace’, why not do it? “Trump said in a message Wednesday in his personal account Of Twitter.

Trump’s criticism of McConnell underscores the deteriorating relations between the president and his party’s leaders in Congress, who represent a faction closer to the Republican apparatus and have failed to make major legislative gains in the first six months of the incumbent president .

In this case, Trump was irritated by comments McConnell made this week in Kentucky, the state he represents and where he is during the summer recess.

“Our new president, of course, has not been in this line of work before and I think he had excessive expectations about how quickly things happen in a democratic process,” McConnell said.

According to The New York Times, Trump spoke on the phone with McConnell on Wednesday to complain about those comments, and to ask him to continue working to replace the system created by Obamacare.

Trump was “lively” during the call, according to the Times, but shortly after he published his first critical tweet with McConnell, and today seems even more frustrated by the subject.

During the past two months, he has repeatedly attacked members of his party for failing to “do their job” on health reform, as they campaigned to repeal Obama’s law since its enactment in 2010.

The last attempt by the Senate to replace that reform failed July 28 with a crucial vote against three Republican senators, and it is unclear whether the party has a strategy to address Obamacare in a different way. Crucial Trump campaign promise to their voters. EFE