Disguised as whales, half a dozen girls tried to prevent visitors arriving in their vehicles from entering the Miami Seaquarium, where the orca “Lolita” is now 47 years captive in a “prison”.

The girls and teenagers were part of a dozen protesters organized by the People for Ethical Treatment of Animals (PETA), an environmental group that has a legal struggle for the release of the whale.

With posters of “Stop the slaughter, stop the show” or “Teach your children compassion, do not buy tickets for the Miami Aquarium prison,” the activists tried to discourage visitors and tourists from entering the Miami Aquarium, .

PETA director Matt Bruce lamented that “Lolita” has spent the last 47 years in the “smallest US tank for an orca” since being separated from his family group in 1970 on the Puget Sound coastal area, In the state of Washington (northwest) when he was just 4 years old.

“We urge the Miami Seaquarium to immediately do the right thing for Lolita,” Brice told Efe.

He recalled that after a legal battle Lolita was included in 2015 on a federal list of protected animals under the country’s Endangered Species Act (ESA).

However, he acknowledged that it is the aquarium that can immediately allow Lolita to “have a natural life” and called on people to “never visit the Seaquarium and encourage friends and family to boycott it.”

“We are trying to get people back, educating them on how Lolita has been here for 47 years and this is not natural,” Angelina Poli, 9, told Efe while carrying a sign that said “Captivity is a sentence Of death. ”

“It is not natural that she is doing tricks for people, she has been tortured, she is blinded by chlorine, I want to tell people that that is not right,” added the girl with a worried face, saying that it was her mother who Has taught him about the subject.

In a heat that was around 90 degrees Fahrenheit, the so-called “Orcas por Lolita” repeated over and over again that the whale was suffering in the absence of space, her family and her partner.

According to PETA, the killer whale has also had a solitary, unmarried life for more than three decades, after his companion Hugo was killed head-on against the small pond they shared. 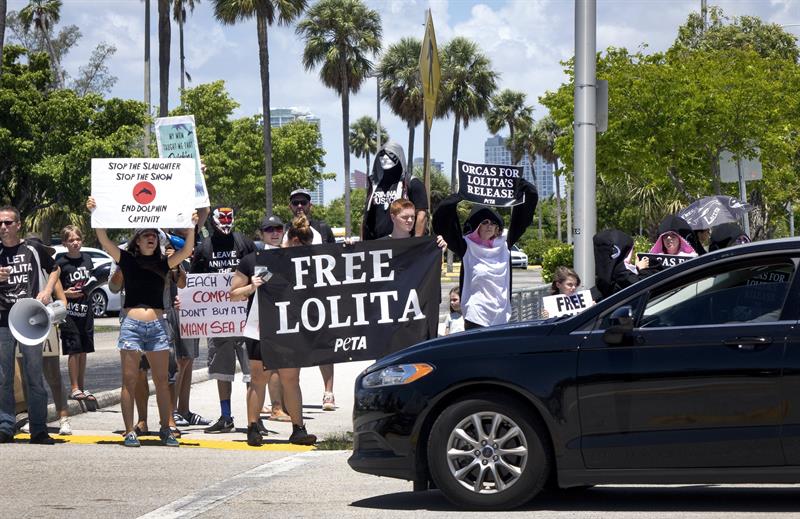 However, Andrew Hertz, administrator of the Miami Seaquarium, told Efe today that Lolita is “healthy” and shares her habitat with Pacific white dolphins.

The director of the Seaquiarium, acquired in 2014 by the Spanish group Parques Reunidos, specialized in leisure parks, added that there is no scientific evidence that the whale could survive if it were transferred to “open waters of the Pacific Northwest.”

“It would be reckless and cruel to treat her life as an experiment and endanger her health and safety to appease a marginal group,” Hertz said.

He said Lolita “plays an important role in the Miami Seaquarium mission to educate the public about the need to conserve the marine environment and its residents.”

“Lolita will continue to be an ambassador for her species at her home in the Miami Seaquarium,” Hertz reiterated.

The Miami Seaquarium has faced a lawsuit since 2015 filed by a coalition of environmental organizations, led by PETA, which consider the captivity conditions of the popular killer whale to “violate” the Endangered Species Act (ESA).

Bruce noted that in that legal process, the following are oral arguments, but that there are no dates yet for such hearings.

Mexico became the first Latin American country member of the International Energy Agency (AIE) and number 30 of this entity, after a series of...

A team of biologists from Central Florida University (UCF) found a turtle hatchling with two heads in a nest on a beach in Brevard...

A Bostonian woman returned more than one million dollars that TD Ameritrade Bank mistakenly deposited into her account when she confused her with another...

Vargas Llosa: “Populism puts on the mask of the right and of the left”

The Nobel Prize for Literature in 2010, Mario Vargas Llosa, affirmed today that populism is "a disease" before which "no democracy is vaccinated" and...

The Hispanic community, underrepresented but increasingly mobilized in the United States

Democrats remain the preferred choice of an increasingly less monolithic collective The Hispanic community represents the largest racial minority in the United States and will...