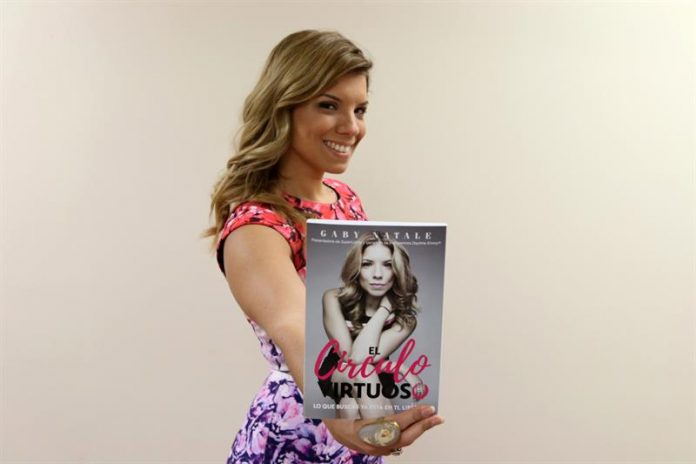 The journalist, television host and businesswoman Gaby Natale, winner of three Emmys for her program SuperLatina, does not have a label for her first book, “Virtuous Circle”, but she does know that the “rebel dreamers” will especially like them.

“I am a label bullfighter,” says the Argentinian from La Plata, who arrived in the United States in 2004 for a “blow of fate” and today turned into an icon of Spanish-language television.

In an interview with Efe for the presentation in Miami of “Virtuous Circle” (HarperCollins), Natale explains that the idea of ​​the book came to mind when realizing that there were “common patterns” in the “fascinating” people he has Interviewed for his program, which is broadcast by VME, public television in Spanish.

Reviewing the profiles of these people, he defined seven archetypes, the dreamer, the architect, the maker, the apprentice, the warrior, the champion and the leader, to whom different actions correspond that form a “virtuous circle” .

Natale explains that these seven archetypes are present in every human being, although not all with equal force.

It is a question of understanding that it is necessary to visualize, plan, execute, perfect, persevere, achieve and inspire, in that order, to succeed, affirms the novel writer, who will soon see her book published in Latin America and Spain and also in English.

“I see it (the book) as a way of personal transformation,” says Natale, who has included his experiences and life lessons, as well as those of his famous interviewees, of which the one who has impacted her the most, Make her cry on camera, it’s Deepak Chopra.

In fact he has chosen seven of his interviewees to represent each of the archetypes. The musician of Mexican origin Carlos Santana is the dreamer, the architect is the Mexican astronaut José Hernández and the maker is represented by the Chilean conductor Mario Kreutzberger, “Don Francisco”.

Cuban actor William Levy plays the role of “apprentice”, the Cuban-born conductor Cristina Saralegui the “warrior”, Mexican actor Eugenio Derbez is the “champion” and Deepak Chopra, the only non-Latin, embodies the ” Leader, “capable of inspiring others.

It is a “universal message” that knows neither languages ​​nor borders, says Natale, who believes, however, that “those who will enjoy it most are rebellious dreamers.”

Speaking about these awards highlights that he does not want the public to keep the idea that honors and success come easily.

Before winning those awards, he had seven Emmy nominations and never listened to his name on the stage, he says.

Naturally he tells how he came to the United States to work for a company dedicated to public relations.

“I felt like a total failure” after spending two years unemployed in Argentina, “I thought that I would never be able to work in the media,” he recalls.

A “blow of fate” made her decide to help a friend who organized a conference on political marketing in Buenos Aires placing chairs and handing out leaflets among attendees.

He would not charge for it and he doubted whether to go or not, but his mother, a lawyer who is “half a witch”, told him to go with his best clothes, lips painted and a big smile, and she ignored him.

When she arrived, the translator had not appeared and Gaby had to take on that role, which changed her life, since she ended up working in the United States for people who were at the Buenos Aires conference and doing journalistic work in her spare time.

Then he went to Sonora, Mexico, to work in marketing.

The jump to the media came as an independent producer of a program in Spanish that was originally recorded in a carpet store located in a shopping center in West Texas.

In the review of its history does not forget that only the third got the “green card” (resident card) and that touched many doors to find some institution that gave a credit of $ 20,000 to buy the equipment for the first study.

It did not arrive for the illumination and they were illuminated with lamps of which they are used in the construction works. “It was all shabby, finished,” he says coquettishly as he prepares for the photos.