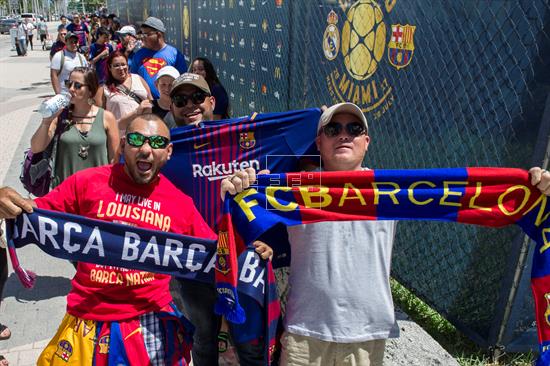 The classic that will face Real Madrid and Barcelona this Saturday in Miami has united soccer fans from all over the United States and Latin America, who come to South Florida after saving a lot to live a party in which they fit flamenco, Spanish cuisine and even Combats

It is the second classic of the history that is disputed outside Spain and the first one in the United States, so in spite of being a friendly party, the madness by azulgranas and meringues has invaded Miami.

The Barcelona footballers Leo Messi, Luis Suarez, Sergio Busquets, Samuel Umtiti and Andrés Iniesta are in charge of inaugurating the popular festival.
“I hope you enjoy this great game, which is very special,” said captain Iniesta.

The man had to start on four occasions his speech by the cries of hundreds of fans who seemed to have started to play the game on Saturday.

Hundreds of fans in white shirts and “Blaugrana” crossed songs and jokes as they waited to take pictures with the cups won by both teams.

In the long line to immortalize next to the twelfth Champions of Madrid were waiting five young Mexicans and Salvadorans who drove from North Carolina to see their idols in the Hard Rock Stadium of Miami Gardens.

One of them, Edgar Arzate, told Efe that this classic is an opportunity that comes “once in a lifetime”, so you had to take it.

The history of the Cruz, a Honduran family living in Miami, is different. Julio, the father, had an esophageal cancer that threatened his life just as the family planned the dream trip to Barcelona to see a match at the Camp Nou. 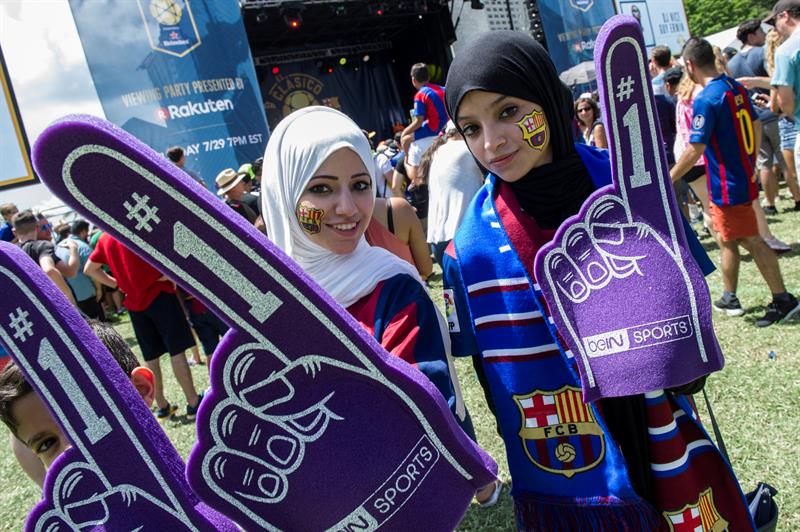 His wife, Cruz, the family’s biggest fan, said that for them and their two teenage daughters, Dania and Alejandra, to go tomorrow to watch the match is a “prize” after a few months of suffering that ended with a happy ending.

Also from Honduras are Ramón Velázquez and Marlon Velázquez, who claimed to have paid $ 8,000 (6,811 euros) for each of their tickets.
“But it’s worth it, they’re front row and it’s closer to Miami than going to Spain,” says Marlon.

Although tickets for the game have fallen in price in recent days, the cheapest still around $ 300 (255 euros).

So a good alternative for those who can not go to Hard Rock Stadium is to go see it at the official giant screen Fiesta in Classic House.

In a city in which 67% of its inhabitants are Latinos, according to data from the last census, most of the fans who walk on an improvised walk of fame in which the stars are Modric or Piqué are Latinos from countries of All Latin America.

The events on Friday began with a flamenco show run by Siempre Flamenco, followed by a Spanish cooking workshop and continued throughout the afternoon.

In between, there is also a niche for a freestyle football tournament in which street players play ball games, as well as children’s activities such as mini-football, table football and video games.

There are those who carry the passion beyond and cut their hair with the shield shape of their favorite team in the “fan zone” itself.

In American hands, the classic has become a show in which even covered a mixed martial arts (MMA) match in which two fighters from Madrid and Barcelona fought and also called “classic”.

On Saturday, before the game, the party will become Latin with performances by the reggaetoneros Alexis and Fido and the Cuban jazz of Renoir Rodriguez & Band.
At the half-time break, the star will be the Mark Anthony salsero.