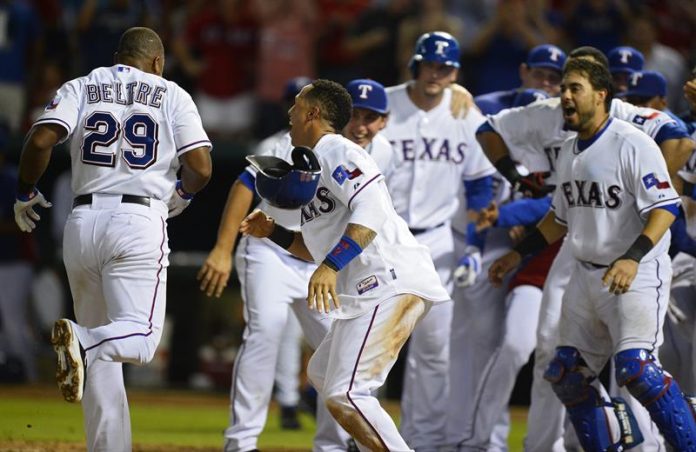 Adrián Beltré took another step into history, connecting two hits, and is closer to reaching the mark of the undisputed 3,000 as a professional in the Major Leagues, which also left him the most outstanding Latin American player of the day.

From the mound, with the same prominence, the Mexican Jaime García had a triumphant debut with his new team, the Minnesota Twins.

While the Venezuelan Jose Altuve went four times to the batting box, made contact with the ball on three occasions and is entrenched as leader of the majors in batting average.

Beltré hit two hits that brought him closer to the historic mark of the 3,000 and the short-stacked innkeeper Elvis Andrus hit four corners in the Texas Rangers’ 8-2 victory over the Baltimore Orioles.

The veteran Dominican slugger made four trips to the batter’s box and connected twice to get 2,998 hits for life.

On Wednesday, also in the field of the Watchers, he was perfect to connect 3 of 3, but was expelled in the defeat of his team by 10-22 against the Marlins of Miami.

With his two hits this evening, Beltre is two of the 3,000 barrier, mark that has the Puerto Rican Roberto Clemente, who got it in the 18 seasons he played for the Pittsburgh Pirates.

Andrus (14) threw the ball into the street in the third inning with a runner basing on starting pitcher Chris Tillman when there was an “out” at the entrance.

Garcia worked six innings and two-thirds and was credited with winning the game from his debut with the Twins 6-3 over the Oakland Athletics.

The Mexican star (1-0), who came Monday from the Atlanta Braves, allowed eight hits and three runs, walked three and struck out seven punters.

The Twins’ starter, who was 4-7 pitching for the Braves, added his third straight win.

Garcia faced 29 batters with 98 pitches, 63 to the perfect strike zone, and 4.05 his effectiveness average.

Venezuelan catcher Salvador Perez homered in the Kansas City Royals 4-2 win over the Boston Red Sox, who are on the losing road.

Perez (21) sent the ball on the other side of the fence in the second episode, frustrating the work of starter Rick Porcello, with no runners on the way when there was an out at the entrance.

The Venezuelan shorter innkeeper Marwin Gonzalez sent the ball into the street in the Houston Astros’ 6-5 victory over the Detroit Tigers.

Gonzalez (19) hit the bat in the sixth inning against the services of starter Jordan Zimmermann, with no runners ahead, with two outs in the inning.
Altuve hit 3 of 4 and extended his winning streak to 19 consecutive games.

In addition, the Venezuelan raised to .369 his batting average, the current best in the Major Leagues.

The Tigers featured first-baseman Miguel Cabrera’s bat (13), who threw the ball out of the park in the fifth inning without runners ahead, with no outs in the game.

Ramirez (18), who went 5-4 and drove in three of the Indians’ nine races, pitted the ball in the second inning by stopping the shots by starter Derek Holland with no teammates on the way and no outs in the entrance.

Santana (14) did it in the sixth episode by overcoming relay pitches Chris Beck, with no teammates ahead, no outs on the board.

Shortstop Orlando Arcia made the play-off and helped the Milwaukee Brewers beat the Chicago Cubs 2-1.

In the fourth episode, Arcia made a selection play to third base and drove the race that defined the ninth triumph of Milwaukee.

The Cubs had second baseman Javier Báez (13) with a quadrangular in the eighth against Anthony Swarzak relay shipments, with no runners ahead, when there was an out at the entrance.

Panamanian short-haired inn Allen Cordoba received a passport with the full house and forced the San Diego Padres’ 3-2 win over the Pittsburgh Pirates.

In the sixth episode, Cordoba received a passport when the bases were busy and forced the race that broke tie on the board, which defined the victory of the San Diego Novena.