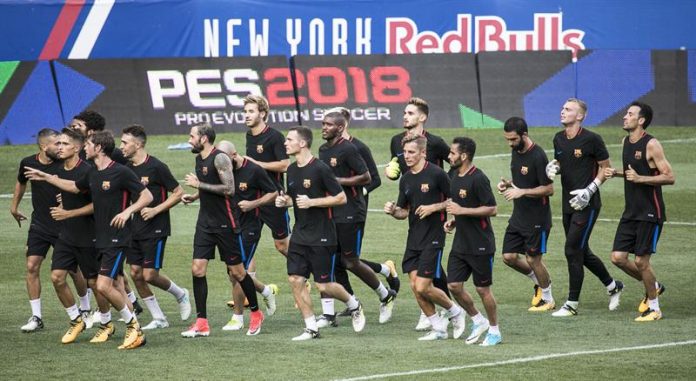 Between an overwhelming heat and the thunderous screams of the Catalan fans, Barca was set tonight at the Red Bulls Arena in Harrison (New Jersey), where he made his final training ahead of the preseason debut against Juventus on Saturday.

Flags, team stars’ shirts and, above all, many arms in the air, including those of a few children on the shoulders of their parents, received from the stands the 26 players who landed in the United States on Wednesday.

Messi and Neymar Jr aroused the maximum expectation in their late departure to the field, especially the Brazilian, who started whistles and some “do not go”, due to the rumors that put him flying away from FC Barcelona, ​​PSG.

However, and in the same line as the club was pronounced today, the new coach of the team, Ernesto Valverde, expressed in a press conference prior to the practice his “conviction” that the striker “is going to stay “.

“Neymar is with us, we have absolutely talked to him and we have talked about tactical issues,” said the coach, who joined Barca only two weeks ago and ruled out going further at the insistence of journalists.

Nor did Sergi Busquets, who dodged questions about his partner pointing out that it is Neymar Jr who should offer information, if he has, and above all believes that “better than here, will not be anywhere.” 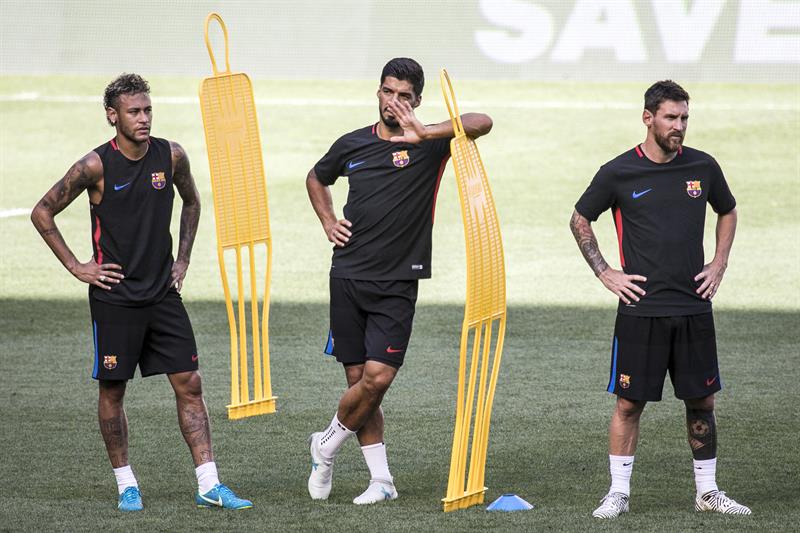 “I want to be here for many years,” said the captain of the group, while Valverde refused to put himself in a “situation” that “has not happened” because it is “worry twice”.

During practice, paused briefly to sell an ankle to Leo Messi, Neymar Jr showed complicity with other players, such as Argentine or Uruguayan star Luis Suarez, a “trident” that the fans hunted talking on more than one occasion.

The training, which lasted more than an hour, showed the incipient relationship between the new coach and the players who have traveled to the United States on this expedition to play in the International Champions Cup.

The Barca match against Juventus, held tomorrow at the MetLife stadium in East Rutherford, New Jersey, will be the first game of the US preseason and the first of Valverde as coach.

The coach said he was living with “normality and expectation” the moment, although he recognized the “different” of the tournament, which is not official. “I want to see my team in competition, I know the players little by little,” he added.

Regarding his plans for the meeting, Valverde did not elaborate, although he did say that the players “are not yet well enough” and that he will share the time between them with “changes in the rest so that there is participation”.

The crowd of today’s session in New Jersey, in which they cast up to seven young spontaneous, showed the muscle that can take Barca in a tournament that will also face Manchester United and Real Madrid.

In this sense, precisely, Busquets denied before the training that the team in which he has spent nine seasons is “tired” or approaching the “end of a cycle”.

“When you do not win all the important titles, it is always said that a generation is finished and what this team has demonstrated is that it has always won, a few more years and some less,” he admitted.

“Last year was not the best for us, but we have the hopes placed in this with a new coach and hopefully we will do well, with many titles and victories,” he concluded.