O.J. Simpson, the former NFL football star, will be released on probation next October after an appeals board today approved his request after serving 9 years of his sentence for armed robbery and kidnapping.

Simpson, 70, participated through a teleconference at the hearing, which concluded with the unanimous vote in his favor of the board that he had to review the application of the former player, who was sentenced to 33 years in 2008.

The former star was convicted of docking and kidnapping two sellers of sporting goods of value in the habituation of a hotel in Las Vegas, Nevada.

The members of the Nevada Parole Board deliberated for about half an hour to report back to Simpson, who from the Lovelock Correctional Center thanked them for their decision.

During the hearing, which lasted for an hour and a half, O.J. Simpson had to answer several questions raised by the four board members.

Among them, he reviewed everything that happened on the day of the incident and said that he is already far from alcohol, that he has not had problems in prison and that he is ready to make up for lost time with his four children.

O.J. Simpson, who in 1995 was acquitted of death charges a year before her ex-wife Nicole Brown and a friend of her, Ronald Goldman, in one of the most media trials in history, also said that he wants to be a better Christian And that the prison has changed it.

Although media was not allowed inside the audience, everything was broadcast live on the internet and television, turning this into another media episode for the former NFL star.

During the hearing, the former athlete also acknowledged that he committed not one but several mistakes that day of September 2007 in which he entered the Palace Station hotel in Las Vegas along with another person to, he said, to recover personal belongings that included photographs and objects of family. 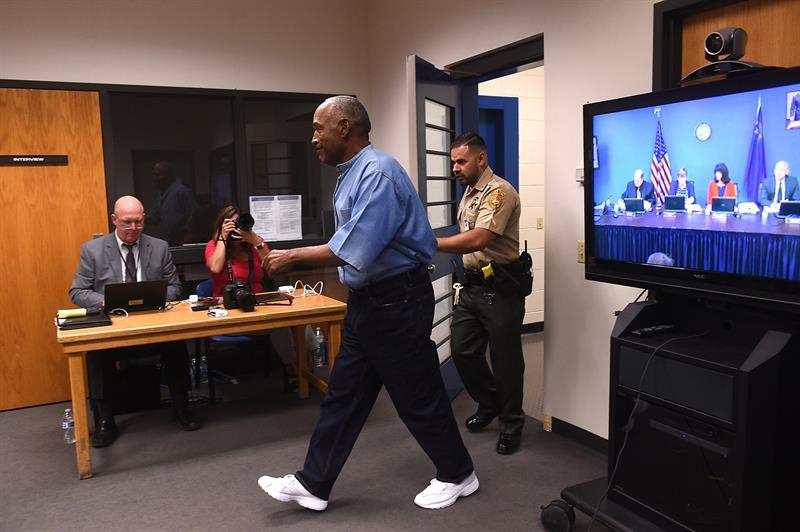 He asserted that he never wanted to keep anything that was not his, that he did not know that the man who was with him carried a gun and that his biggest surprise was to find Bruce Fromong, a friend of his, who was declared as one of The two victims in this case.

Fromong testified today in favor of Simpson and assured that never felt threatened by this one during the assault.

Lawyers for the ex-state have said that the sentence imposed in Las Vegas was not only exaggerated, but influenced by the controversial case of 1995, argument supported by the same Fromong.

In 2013, he was granted probation for 5 of the charges currently paid in Nevada.

However, it was necessary that the minimum sentence of 9 years should be met and that the same benefit be awarded for the remaining charges in order to be able to leave the prison.

Simpson will be based in Florida with his family and must comply with all parole requirements in that state.