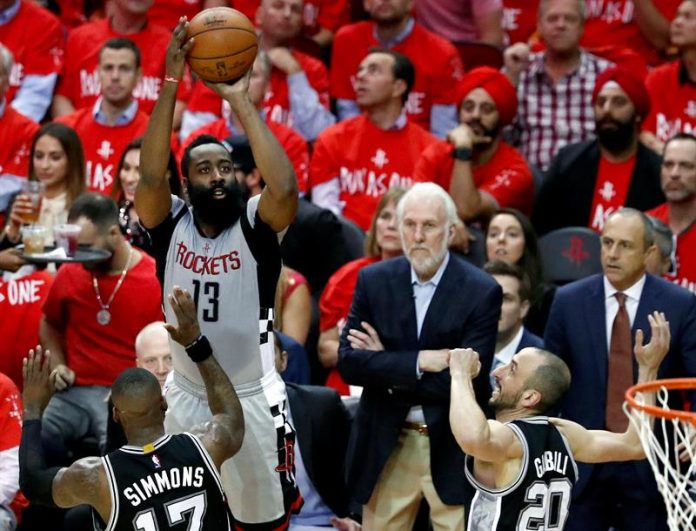 The Houston Rockets continued their promotion to the maximum of having managed to join the escort James Harden and base Chris Paul, as an important step in the fight for the third league title in its history.

If on Friday, the Rockets officially introduced Paul, in what the former Los Angeles Clippers defined as a fresh start in his career, Saturday was the turn for Harden, who reiterated his full commitment to staying “for many years “With the Houston franchise.

“This is my home, this is where I want to be and I’ve never seen such a great commitment from an owner and managers to make the franchise a winner,” Harden told a news conference. “Our goal is very clear and it is none other than to get the league title, something that we can now begin to think seriously and objectively.”

Harden, 27, who has been named to the All-Star Game in his five seasons with the Rockets since being traded by the Oklahoma City Thunder, has already made history as the highest paid player by closing the Your contract.

“For me Houston is like home,” Harden reiterated. “Mr. Alexander (Leslie) has shown that he is committed to winning and both my teammates and I will do our best to continue to improve and be able to compete for the title.”

The Rockets’ star escort signed an extension for four years and $ 160 million, which together with the 68 who still have agreed on the contract that is missing for two more seasons, give a guaranteed income for six years of 228 millions of dollars.

“Everything has been easy with James (Harden) because that money we could give him, he deserves it, and more importantly he wanted to stay in Houston,” said Rockets general manager Daryl Morey. “Now we have an exceptional pair of players and we will try to put them to the side always professionals who give them all the help to fight for the title.”

The same goal that the Celtics have with the signature of forward Gordon Hayward who have already signed after leaving the salary space enough to give you 128 million dollars and four seasons.

Hayward will join Isaiah Thomas and Al Hoford as the star players on the team, as well as rookie Jayson Tatum, who has been selected as number three in the past college draw.

If Hayward made the Celtics happy with their decision to choose them as the team they wanted to pursue a career with, they did a great deal of damage to the Utah Jazz, the team that invested in it, developed it, and Mounted a rebuilding as a pillar.

His departure made all the plans and projects change and have had to establish a new direction that will not have to start from scratch with a new reconstruction but will do with the French pivot Rudy Gobert as his franchise player.

Utah general director Dennis Lindsey said the team will not enter rebuilding mode after losing Hayward, but will focus on having a defensive team that can fight the strongest in the West.

“We feel we can build defensively around Gobert,” Lindsey told The Salt Lake Tribune. “We looked at him, he is a top player and a single defender, so we wanted to team up around his talent.”

Prior to free agency, the Utah team received base Ricky Rubio of the Minnesota Timberwolves by transfer.

“We just felt like we had too much talent to let it go,” Lindsey said. “The main thing with Quin and Rudy is what we are defending, we feel we have a great player in Rudy, and we want to demonstrate his skill.”

Another who will be able to demonstrate once again his ability as player and leader will be the veteran base Rajon Rondo that agreed to the signing of a year contract with the Pelicans of New Orleans, where will be reunited with its excompañero of the Kings of Sacramento, pívot DeMarcus Cousins.

He left the NBA was the Spanish base Sergio Rodriguez, who after a year with the Sixers of Philadelphia, returned to European basketball, this time to sign with CSK Moscow for three seasons.

Rodriguez, 31, who lived his second NBA experience, will reach the Russian side to fill the Serbian base Milos Teodosic, who signed a contract with the Clippers.