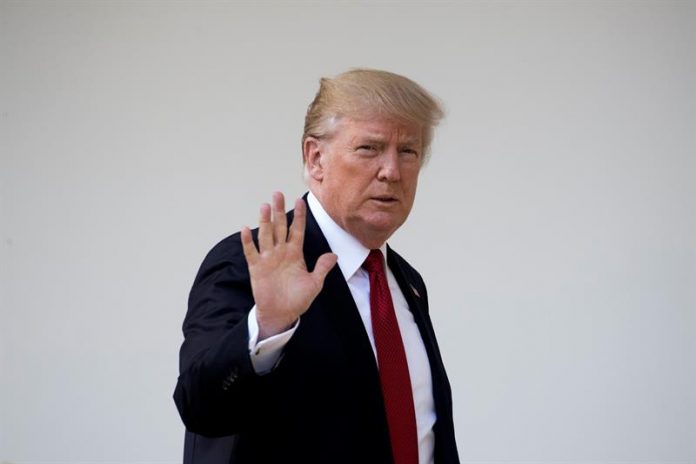 With just five months in power, President Donald Trump has become an invincible politician, immune to his own onslaught on Twitter and who, no matter how serious and sexist the offense, always gets to land on foot.

Experts consulted by Efe agree that Trump has turned noise, adrenaline and suspense into key components of his presidency, in which proposals are missing and overruns the president’s expletives, intended to delight his most loyal electoral base.

“He always lands on his feet, politically invincible,” Steven Taylor, a professor of politics and government at American University in Washington, told Efe.

There seems to be no political consequences for Trump, even if, like this week, he takes Twitter to insult famous MSNBC newscaster Mika Brzezinski, whom he called “crazy” and whose looks he mocked when he said he saw her “bleed Profusely for a facelift. ”

Trump attacked Brzezinski and his set partner and fiance Joe Scarborough after the presenters echoed a critical article published by The Washington Post.

“But honestly, at this point, is anyone really shocked by what he tweeted or surprised that he attacked a couple of celebrities in personal terms?”, He told Efe. “He seems unable to control himself and no one can take the phone off him. The professor of the University of George Washington, Michael Cornfield.

“This remains a somewhat strange, exciting and repulsive presidency at the same time,” he said.

Cornfield, however, drew attention to the fact that Trump did not get “almost anything important in political terms”, something “strange” because the first months in the possession of a president are those in which a greater number of Achievements in internal politics.

Pending is, for example, the promise to dismantle the health reform of former President Barack Obama, known as Obamacare.

Trump wanted the Senate to vote this week on a bill to replace that health bill, but the Republican leadership had to suspend the vote in the face of strong disagreements within the party, divided between moderates and ultraconservatives.

Steffen Schmidt, a professor of politics at the University of Iowa, believes the reversal in the Senate was “terrible” for Trump, who has now loosened the rope and given lawmakers more time to reach an agreement.

Earlier this week, Trump celebrated the Supreme Court’s decision to allow the entry into force of some parts of its immigration veto, designed to ban the entry into the United States of refugees and nationals from six Muslim-majority countries .

Although the Supreme Court’s decision is not final, Trump remained true to his principle of “declaring victory in any case and moving forward,” Schmidt said.

Trump wants to be perceived as a “champion” president, and for that very reason, he started raising funds for his re-election for 2020 this week, something very unusual since he has only been in power for 5 months.

“Unless Democrats revive, Trump’s power is not threatened,” said Schmidt, who predicts that the Democratic Party’s “split” and “chaos” will prevent them from winning the congressional majority in Congressional elections in 2018 , In republican hands.

Democrats, who do not control any of the branches of the state (neither the Executive, nor the Legislative, nor the Judiciary) are still looking for the best political strategy to deal with Trump and his progressive wing misses a strong voice that mobilizes To the younger electoral base.

And this lack of force in the opposition is the best gift for Trump and his attempts to “mislead the Americans to the point where they accept the unacceptable, yield to the grotesque and accept total arbitrariness as a principle of government,” said this Week Roger Cohen, columnist for The New York Times.

In the game of “trumpismo”, understood as arbitrariness and confusion, Trump is the champion.