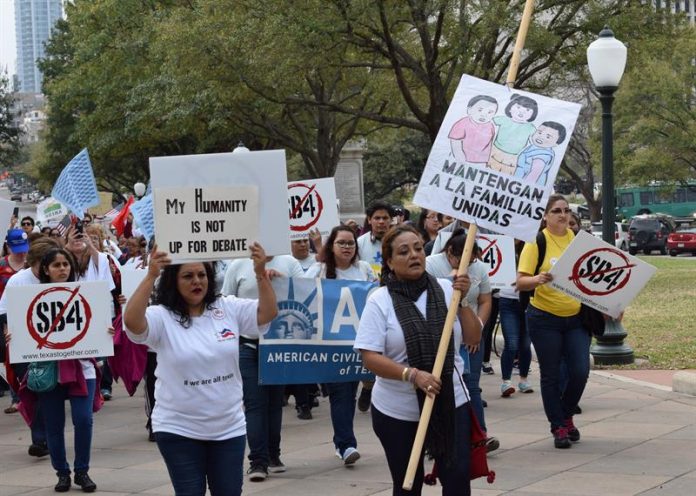 The city councils of two border towns with Mexico, Palmview and La Joya, approved today to join the demand that several cities and counties presented / displayed against the state of Texas by the promulgation of an anti-immigrant law that prohibits the “cities sanctuary”.

Authorities from both Texas towns voted to join this legal battle, which is already participating in cities such as Austin, San Antonio, El Paso, Dallas or Houston.

In addition, the border town of El Cenizo and the counties of Maverick, El Paso and Bexar are also part of the lawsuit against that southern state.

“The majority of people in the Valle del Río Bravo are Hispanic,” local media told The Monitor, the mayor of La Joya, Jose Salinas, who lamented that the injustices against his community are “terrible and continuous.”

Following the unanimous approval (4-0) of the commissioner of La Joya, the city administrator was ordered to explore coordination with other municipalities and entities in litigation against this legislation.

The controversial law, known as SB4, prohibits “sanctuary cities”, those that regulate in favor of undocumented immigrants, and allows local authorities to question the immigration status of anyone, even at a traffic stop.

In addition, it establishes possible jail terms and large fines – up to $ 25,000 – to sheriffs and authorities who violate this legislation and try to protect undocumented people.

Palmview Commissioner Javier Ramírez told the local media that he was opposed to the law because he believed that, among other things, it would negatively affect “many families.”

“I work in a school and I can honestly tell you that between twenty and thirty percent of our parents are probably undocumented, but their children are legal citizens,” Ramirez said.

“What will happen if these people are arrested and have no papers?” He asked himself.

La Joya and Palmview joined the lawsuit three days after a federal judge in San Antonio heard arguments in the case facing numerous cities and counties against the state over the issue.

The judgment must be issued before September 1, the date scheduled for the law to come into force, as stipulated by the rules of the Texas Legislature.