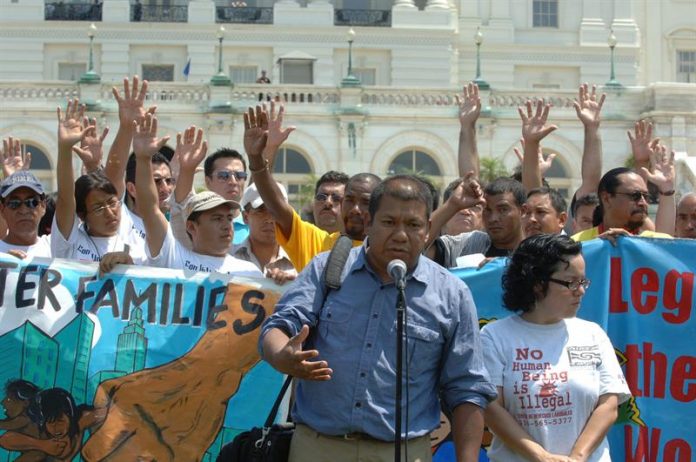 The labor force participation rate of immigrants protected by Temporary Protected Status (TPS) is higher than the general population of the United States or that other groups of immigrants, with or without legal status, says a study released today by the TPS National Alliance.

The report “Temporary Protection Status: The experiences of immigrant Hondurans and Salvadorans” indicates that 94% of the men covered by TPS work, and of them almost 84% do more than 40 hours a week and 7% Has more than two jobs.

“We are demonstrating with this study that those covered by the TPS are a working force like no other, who are the first in the line to be legalized. Thinking about expelling them from the country is absurd,” Pablo Alvarado, director of the Network National Day Laborers (NDLON).

With the results of the study, advocates of immigration protection, which benefit hundreds of thousands of Central Americans, seek to demonstrate that protected immigrants have contributed to the development of the country with their work and the payment of taxes.

The wages of these workers would also be a sample of the value of their contribution. The average monthly income of respondents is $ 2,910 per person, as men earn on average $ 3,598 and women earn about $ 2,054 per month.

Ninety percent of them report taxes every year, the study says.

The economic stability that these benefit-protected immigrants have achieved, in some cases for more than 16 years, has allowed them to achieve the American dream when buying housing, 33.6% in the case of men and 29 , 9% in that of women.

Martha Arévalo, executive director of the CARECEN-Los Angeles group, warned that it is precisely the TPS that has helped these immigrant families to establish bases that allow them to participate in the economic development of the country.

“Given the opportunity, immigrants are moving forward to help create an optimistic future for all,” he said.

The study was presented today amid a national campaign in defense of the TPS, which has been in the sights of the Trump Administration.

National Security Secretary John Kelly said a few weeks ago that “by definition, TPS is temporary,” an idea that other officials support.

According to Immigration and Citizenship Services (USCIS), at the end of 2016 there were 263,282 Salvadorans, covered by the benefit that protects them until March 9, 2018, 86,163 Hondurans and 5,349 Nicaraguans, whose program wins in both cases on 5 January next year.

The research was commissioned by organizations such as Carecen, Renase and NDLON to launch a campaign to seek permanent residence for these immigrants, but the election of Donald Trump as president changed the course of the strategy.

“Now it is not a matter of asking for the residence, first we are going to save the amparo”, warned Alvarado.

The need to defend this amparo prompted immigrant advocates to formalize the TPS National Alliance that brings together organizations across the country and seeks to seek support in Congress to maintain status, which depends on the executive.

“Ending the TPS protections would return hundreds of thousands of people to countries plagued by violence and insecurity and will put new burdens on already weak economies, generating more undocumented immigration,” insisted Adriana Beltrán, a spokeswoman for Citizen Security at WOLA.

In the middle of the campaign, immigrant advocates warned that if the program is canceled and a repatriation process begins, thousands of US-born children will be separated from their parents.

The survey warns that 86.3% of those covered by the TPS have children, and 61% of those children were born in the United States.

“In any immigration program being analyzed, those covered by the TPS are the first to be legalized, that is an irrefutable conclusion,” Alvarado insisted.