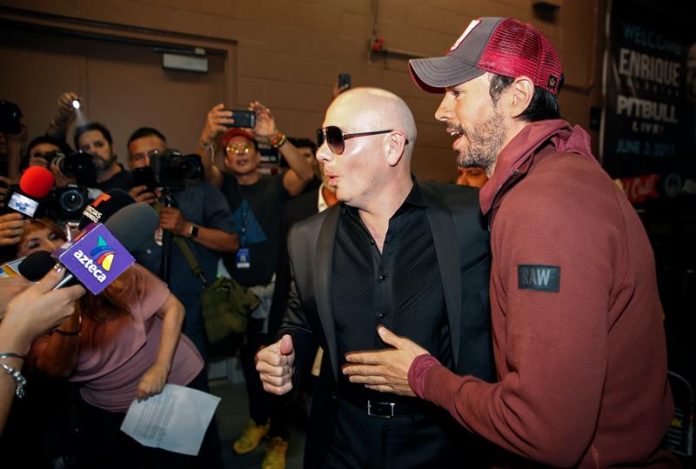 The singers Enrique Iglesias and Pitbull triumphed today as kings before an audience totally delivered from the first minute, in an evening of pure Miami marked by the charisma of these two artists, a native and another adopted son of the city.

As prophets on their land, the two Latin music superstars congregated more than 25,000 people at the famous American Airlines Arena, the stadium where the NBA basketball team plays Miami Heat.

Van Halen’s classic “riff” of “Jump” sounded as Pitbull appeared onstage from a platform that rose from the ground before giving his more political face.

“305, are you ready?” Shouted Pitbull, referring to how the miamenses are known by the telephone prefix of their city, while their neighbors responded with enthusiasm.

Armando Christian Pérez, Pitbull’s real name, began with “Feel This Moment”, his success with Jennifer Lopez, and later reviewed his career with songs such as “Culo” or “Do not Stop The Party” with a large group of Dancers

Later, before singing his last song, “Hey Ma,” the singer of Cuban origin sent a clear message to his country of origin: “I want to go back to Cuba, but I will do it when I am free of political trash.”

Among songs, he also took to claim “unity” of all Americans, regardless of race, because they are all “citizens of the (…) United States of America.”

“Latinos up, Latinos down and who does not like to fuck off,” were his last words on the stage.

Moments later came the main headliner of the event, the Spanish Enrique Iglesias to finish making the sports complex collapsed.

Without rest, the Spanish delighted to his followers of always with its classic songs but also it raised the rest of the public with its more recent numbers 1 while it moved from one side to another of the stage.

From “Dancing” to “El perdón”, until his bet for the summer of 2017, “Get on the radio”, Iglesias sang in a spectacular staging making everyone chant without quarter.

The two artists kicked off on June 3 in Chicago the joint tour of 35 concerts in which a total attendance of 450,000 people is expected.

Already in 2012, Madrilenian and Miami had joined forces for a series of concerts of “Euphoria Tour”, where they reaped similar triumphs to that achieved tonight in Miami.

The exceptionals were, like in the rest of the tour, the youth group CNCO, which before the strong plate of the night already unleashed the madness of the public with its success “Reggaetón lento”.