Alfa Romeo’s North American director Pieter Hogeveen told Efe today that the launch of the Stelvio SUV in North America “is very important” and he expects the model to double the sales of the Italian brand in the United States.

Hogeveen, who starred in the presentation of the Stelvio to the specialized media in Nashville (USA), also noted that the SUV, the first produced in the history of Alfa Romeo, will expand the brand’s clientele.

“This is a very important presentation for the brand, and it is also the first Alfa Romeo SUV series,” Hogeveen explained.

“This is the largest segment of high-end vehicles. In fact, one in every four high-end cars sold in the industry is a mid-size SUV,” he added.

Alfa Romeo, one of the brands of the Fiat Chrysler group (FCA) and returned to the United States in 2014 after its departure in 1995, began its new journey in the United States with the 4C, a niche vehicle that only sells a few tens Of units per month.

But 4C has served to put the Italian brand back into the minds of American drivers and start rebuilding the dealer network in the United States.

By 2014, Alfa Romeo had 84 dealerships in North America, mostly in the United States. Last year, the number increased to 181 and by the end of this year, Hogeveen expects the figure to be at 216.

The second vehicle of the US brand, Giulia, arrived in North America in December 2016 and has served to expand the appeal of Alfa Romeo and increase its commercial network.
In February, Alfa Romeo sold in the US. 412 units of the Giulia and 31 of the 4C. In May, sales of the Giulia had multiplied to 883 vehicles.

The Stelvio, which takes its name from a famous mountain pass in the Italian Alps region, will be the third Alfa Romeo vehicle in the United States when it arrives in the country’s dealerships in July.

Hogeveen explained that Alfa Romeo’s strategy in North America is to follow the path marked by the Giulia, a vehicle from which the Stelvio borrows its platform: excellent driving dynamics and handling and, he said, “technology, high performance and a beautiful Italian design”. 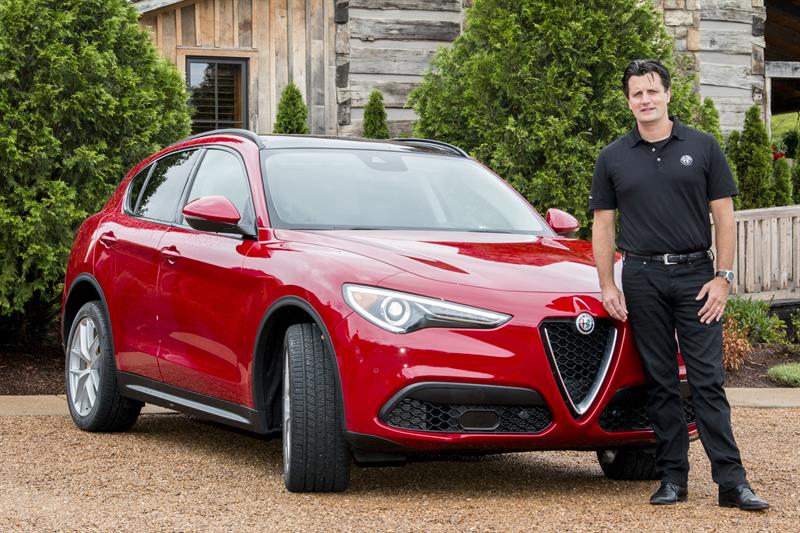 The manager of Alfa Romeo believes that the Stelvio has all the elements to significantly expand the sales of the brand in the United States.

“The clientele we are pursuing with this vehicle is more extensive, thanks to the technology and design of the vehicle, I think we have something very good,” said the manager of Dutch origin.

Hogeveen added: “We continue to produce the best driving dynamics in the segment with 280 horsepower and 306 pound-feet of torque, it’s an SUV that only Alfa Romeo can produce, we’re excited and given what’s happening in the sector is a great opportunity. For Alpha to win the US market. ”

The arrival of the high performance saloon Giulia has allowed Alfa Romeo to shoot its sales in the United States and Hogeveen expects the Stelvio to maintain the same pace of growth for Alfa Romeo.

Hogeveen said he expects “parity” in sales between Giulia and Stelvio.
“In terms of volume they have the same opportunity,” he said.

“And I would not be surprised if we sold the same amount of Stelvio as Giulia,” he added.

Regarding Stelvio’s clientele, Alfa Romeo expects an almost equal distribution between men and women, compared to the experience of the Giulia where male customers are the main source of demand for the saloon.

Hogeveen said that in the first months, sales will be dominated by fans of Alfa Romeo but that later the clientele will be expanded in the market.

“There are a lot of people passionate about the Alfa Romeo brand, but within 10 months we will see a very broad clientele, gender neutral, the segment is divided 50% between men and women, which is important for us,” he explained.

“Everyone wants performance and enjoys driving something they can feel proud of. And the authentically Italian design will attract a lot of people,” he said.

Libya marks ten years this Wednesday since the capture and execution of the country's then leader, Muammar Gaddafi, after months of fighting triggered by...

The United Nations High Commissioner for Refugees (UNHCR) has confirmed that Brazil has already recognized 37,000 Venezuelan refugees to be at the head of...

Steve Kerr charges Trump: “Racists must not be allowed to be presidents”

Golden State Warriors coach Steve Kerr has criticized statements by US President Donald Trump, who called protesters of the Minneapolis protests "thugs," and has...

Sleep problems may lead to suicidal tendencies in young people

Sleep problems or lack of sleep can lead to suicidal tendencies in young adults, according to a report presented today by Stanford University. The report...

Quarterback Eli Manning threw a touchdown pass in what could have been his last game with the New York Giants, who beat the Redskins...