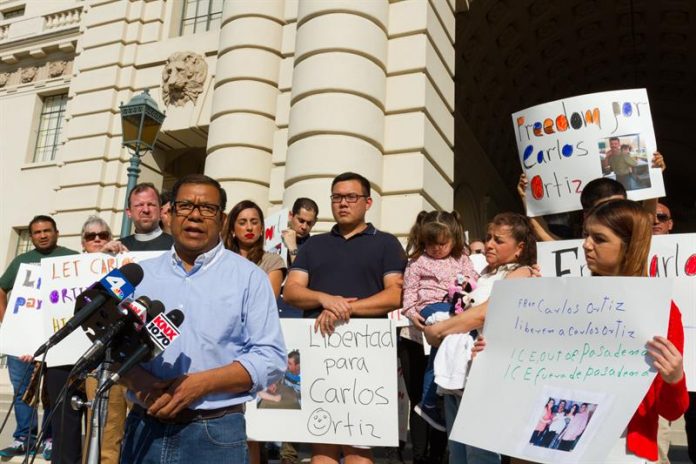 “This administration is increasingly empowering employers and giving them the right to exploit their workers to the point of enslaving them and removing their wages,” Pablo Alvarado, director of the National Day Laborers Network, told Efe.

The case of three farm workers alleged to have been victims of labor abuses in California’s Central Valley is the latest example of the problem.
Immigrants, who arrived in the United States on a temporary worker visa, did not receive the promised salaries, but were also allegedly unable to return home because their passports and visas were confiscated by their employer.

Efrén Álvarez Cabeza, 51, was arrested for this crime and last Friday the Fresno prosecutor accused him of six felony counts, including human trafficking and fraud.

According to statistics from National Human Trafficking Hotline, California is the state where the most reported human trafficking cases are reported in the country.
In 2015, 978 complaints were filed in this state and in 2016 the numbers increased dramatically to 1,323, 148 of which related to labor abuses.

Texas, Florida, New York, and Georgia complete the list of the five states with the most reports of trafficking.

Melissa Gomez, a member of the Fresno Economic Opportunities Commission’s Central Valley Against Human Trafficking Project, warned that unfortunately many workers who are victims of this crime do not report their situation and remain in the shadows.

“This case (the indictment against Álvarez Cabeza) is monumental for Fresno County. Whatever the outcome, it brought to light a terrible injustice that is happening within our community,” he said of a county in which Of 200,000 agricultural workers.

But Alvarado warns that this year the fear of workers to report has increased.

“We know of a case (in Los Angeles) where several workers are holding $ 100 a week of their wages, but they do not want to report for fear and we can not do anything,” he said.

A study from San Diego State University found that 31 percent of undocumented migrant workers who spoke Spanish and were interviewed in San Diego County had been trafficked.
Fear of being expelled from the country would not be the only problem faced by working slaves.

Gomez explained that the stereotypes that make the community think that trafficking in people only involves the sex trade also affects its eradication.
“It is important to expand the narrative to include a diversity of experiences in our region with respect to forced labor,” he said.

Another vulnerable sector that has activists on alert are domestic workers, because in 2016 a total of 574 women reported being victims of labor trafficking in the country.

“They are in a worse situation because of the level of isolation, and this rhetoric puts them in greater danger,” Alvarado said.

Two of the victims in the Fresno case are women. Álvarez Cabeza pleaded not guilty, his lawyer claimed that his client had withheld the workers’ papers as security for a loan he had made so they could rent a home.

Gomez said that collaboration between local, state and federal authorities, immigrant rights organizations and the community depends on these cases being brought to light and encouraging others to “break their chains.”

Victims will also be able to find shelter, food, transportation and legal advice among other benefits offered by organizations such as Gómez.

“Labor exploitation and slavery is a crime that all authorities must pursue regardless of who is in the presidency. We need to create awareness in this,” said Alvarado.