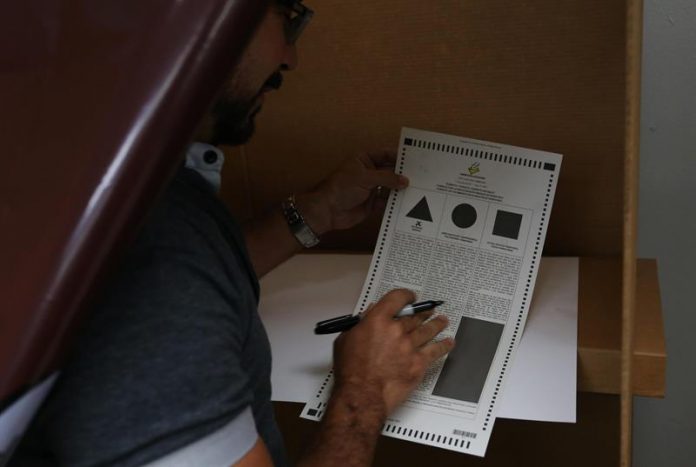 A 97.17 percent of the people who left today to vote in the plebiscite on the legal status of Puerto Rico, opted today for the option of statehood with 97 percent of the votes counted.

According to data published by the website of the State Elections Commission (CEE), a total of 476,635 electors chose statehood.

That figure far exceeded that of independence, which won 1.5 percent of the votes, and only 1.3 chose the current Commonwealth status (ELA).

Of a total of 2,260,804 registered voters, about half a million went to vote in a non-binding consultation.

Protesters burn US flags in front of Electoral Commission

A group of people who demonstrated today in San Juan burned several US flags in protest of statehood and in favor of independence.

The independentistas also painted graffitis in which they could read “no fear” and “independence already”, among others.

P.Rico teachers criticize the use of closed schools for the plebiscite

Schools that the Department of Education closed to move its students to other schools opened today for the plebiscite on the status of Puerto Rico, a fact that was criticized by the Federation of Teachers of Puerto Rico (FMPR).

This includes, they added, facilities in front of which parents have set up camps to try to shut down the closures.

“The government’s priorities are definitely distorted,” said Mercedes Martínez, president of the FMPR, stressing that the cost of the plebiscite will be about $ 8 million, and that this amount would be necessary for the Department of Education.

The Federation of Teachers reported that “in the midst of all this spurious process, police have been mobilized to schools where there are camps of resistance to closures to intimidate mothers and fathers.”

“In schools Luis Santaella and Mulitas Alvelo de Aguas Good cops have approached to warn them that they had to allow passage to those who were to vote.” While schools are supposedly not fit to educate, they are good for partisan political processes, “he added. .

In Corozal, FMPR reported incidents with parents Amneris Rivera and Adner Dumey of the Hipólito Caldero School where the police visited them to tell them they had to be within 100 meters of the school in the vote.

The Federation of Teachers concluded that “after this Sunday the plebiscite will pass and will have no consequences, the education of the children will never pass, to that, on which we must build the country, we will defend it without cease.”