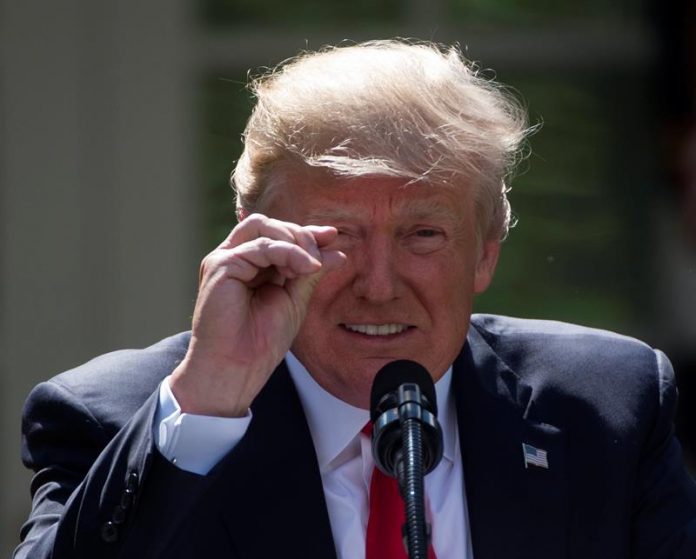 President Donald Trump honored one of his campaign promises today by announcing the country’s withdrawal from the Paris Climate Agreement, arguing that the pact puts the US economy and workers in “permanent disadvantage” in line with its nationalistic philosophy.

“We’re going out, but we’re going to start negotiating and we’ll see if we can come to an agreement that’s fair,” Trump said in an expected half-hour speech from White House Rosaleda.

Thus, the president left the door open for the country to reintegrate into the climate pact in the future or to negotiate another agreement “entirely” new, “better” and “fairer” for the US.

When it starts a process for the withdrawal of the climate agreement, the United States will be left alone with Nicaragua and Syria, the only two countries not signatories of the commitments adopted in Paris by almost 200 nations by the end of 2015 and ratified by a total of 147.

Point 28 of the Paris Agreement states that any country that has ratified the agreement, such as the United States, can only request its departure three years after its entry into force, that is, on November 4, 2019.

Once this request has been formally made, another year must pass before the agreement can be effective, so if the process is to continue, it will be necessary to wait until November 4, 2020, the day after the next presidential election in USA.

With the decision announced today, the US will “cease all implementations” of its climate commitments under the Paris framework, including the goal proposed by former President Barack Obama to reduce by 2025 greenhouse gas emissions by 26 to 28 % From 2005 levels.

“We do not want anything to stand in our way,” Trump said in highlighting the US economic recovery and placing the Paris Agreement as an obstacle to job creation.

The pact against global warming “is less about the climate and more about other countries that gain a financial advantage” over the United States, according to Trump, who noted that Washington will stop contributing to the Green Climate Fund.
In addition, the president said that Paris means “a” massive redistribution of US wealth to other countries.

Trump also spoke of the “unacceptable legal risk” of remaining in the agreement, saying he wants the US to remain a global “leader” in protecting the environment, but in a “just” way, denouncing that the Paris commitments have not been Strict enough for countries like China or India, as polluting as yours.

“I was elected to govern Pittsburgh,” a city of the US industrial belt, and “not Paris,” Trump emphasized in line with his foreign policy maxim to always put America first.

The winners with the decision announced today are, in addition to Trump’s most loyal voters, the coal industry, which the president has vowed to revitalize; The director of the Environmental Protection Agency (EPA) and well-known skeptic of climate change, Scott Pruitt; And White House chief strategist Steve Bannon.

On the other side, the losers are those who had pressured Trump to keep the US in the agreement, including his Secretary of State Rex Tillerson, and the marriage of his daughter Ivanka and Jared Kushner, as well as environmentalists, leaders Business and government representatives from around the world.

Last weekend, while attending a summit of G7 leaders in the Italian city of Taormina (Sicily), Trump anticipated that he would take his “final decision” on the Paris Agreement this week.

According to the White House, Trump wanted to listen to its partners in the G7 before making a decision, but in the end the pressure exerted at that summit in favor of the agreement leaders such as the German chancellor, Angela Merkel, or the president French, Emmanuel Macron.

During his election campaign, Trump harshly criticized the Paris Accord and climate change, a phenomenon he once described as the “invention” of the Chinese, and today he insisted that his only “obligation” is with promises that Led to the White House and “protecting” American interests.