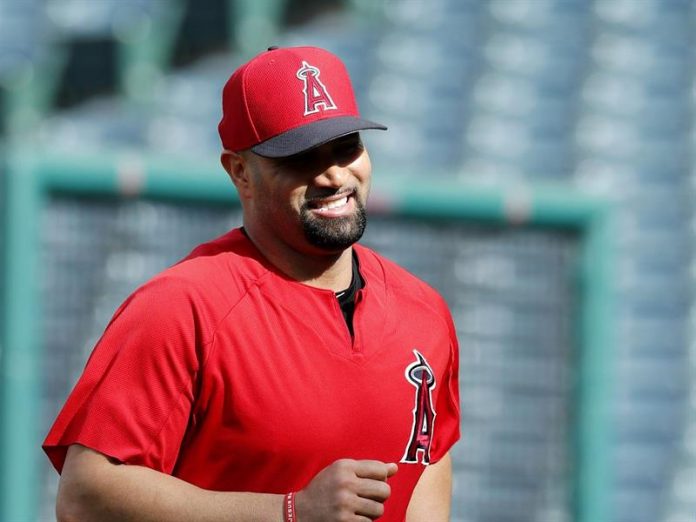 The Dominican ranger Marcell Ozuna returned to play with power bat and showed again his offensive power to connect his homecoming number 13 so far this season.

His compatriot Albert Pujols continues to hit solid and added his second homer on the same number of consecutive days and brought him closer to another individual.

Ozuna (13) homered in the Miami Marlins’ 7-2 triumph over the Philadelphia Phillies and did so in the second inning against Hispanic starter Vince Velasquez, with no runners ahead, no outs in the entry.

The Dominican, who connected his most recent home runs on May 27, returned to look power and sumo sumo quadrangular number seven so far this May.
While his compatriot designated hitter Albert Pujols hit four-cornerers for the second straight day and the Los Angeles Angels beat the Atlanta Braves 9-3 in the interleague game.

Pujols came in with 599 home runs as a professional and is already one of entering the select club of the 600, which will secure him a position as a future Hall of Fame member.

Jose Bautista also blew the bat for the Toronto Blue Jays, who beat the Cincinnati Reds 6-4 in another interleague match.

Bautista (10) hit the fourth inning, with no runners, against starter Asher Wojciechowskim’s outs without a run.

Cuban-appointed batter Kendrys Morales (10) also pitched him in the eighth, with a runner, against closer closer Blake Wood.

Another taponero, the Mexican Roberto Osuna (10) worked an entrance and was pointed the ransom, striking a batter, with the Blue Jays.

Also from the mound, Cuban starter Ariel Miranda worked five innings and had the support of two homers to secure the Seattle Mariners’ 10-4 victory over the Colorado Rockies, another interleague duel.

Second-seeded Robinson Cano (10) blew the bat in the seventh, solo homer, to decipher relay coil Mike Dunn when the pitcher had not drawn an out from the mound.

Elvis Andrus homered for the Texas Rangers, who beat the Tampa Bay Rays 9-5.

Andrus (7) connected from four corners in the seventh inning, with two runners against relay Danny Farquhar.

Severino (4-2) threw six innings and one-third, allowed seven hits and one run, gave a base and struck out eight opponents after batting 27 hitters with 100 shots, 73 strikeouts, and left 2.93 for his effectiveness.

Herrera (12) was credited with ransom in one episode, in which he struck out two rival hitters.