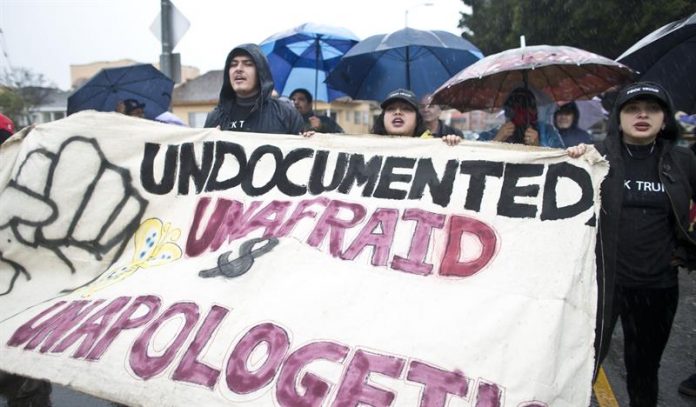 Several California organizations staged a demonstration in Sacramento today to promote legislation that protects undocumented immigrants and to protest against the arrests of immigrants who have no criminal record or arrests of parents of American children.

Protesters, members of the California Service Workers’ Union (SEIU), the American Civil Liberties Union (ACLU) and the national network of faith-based organizations PICO, among others, denounced today the results of the report “I still need you”, who says that nearly 10,000 immigrants are detained every year in California.

The report by Human Rights Watch stated that “we estimate that wax of 47% of (undocumented) detainees in California has a US citizen child.”

The protest sought to express support from participating organizations for a number of bills that are in Congress in California and that seek to protect undocumented immigrants, including California’s declaration as a sanctuary status or imposing more restrictions on employers who share data With the immigration authorities.

He highlighted the progress made by the San Francisco Democrat’s AB 450 bill, David Chiu, which requires employers to seek a judicial guarantee before allowing the Immigration and Customs Enforcement (ICE) to enter the sites And forbids the delivery of confidential information from their employees without a court order.

The measure was rated today by SEIU United Services Workers (USWW) president David Huerta as “California’s newest and strongest challenger to the deportation force of Trump that has mercilessly pursued immigrants” .

In a statement released today, Assembly Speaker Anthony Rendon said that by resuming his work today the legislative body will move forward measures that defend Californians and immigrants.

“When the Assembly returns from Memorial Day weekend, we will study hundreds of other important measures that are looking for changes, big and small, to benefit our state,” said Rendón.

Both measures are expected to be approved by the legislature in June to be presented to the governor’s office for signature or veto.