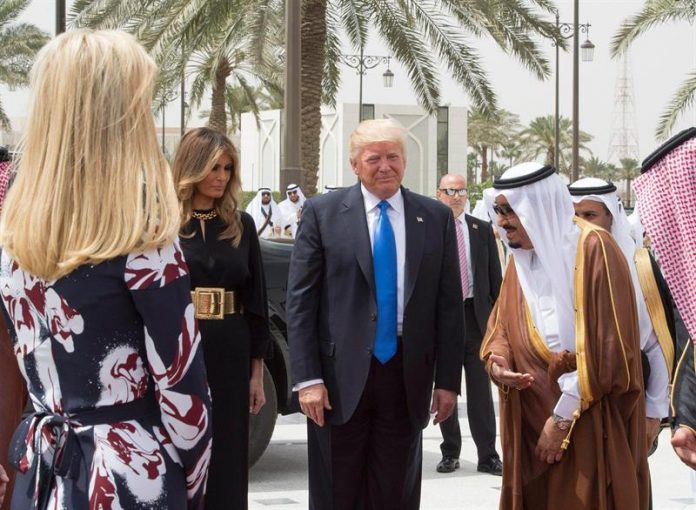 US First Lady Melania Trump and President Donald Trump’s eldest daughter, Ivanka, are speaking at home today in avoiding wearing a headscarf in Saudi Arabia, though the president criticized the gesture in 2015.

Melania and Ivanka Trump accompany Trump on his first international tour as US president, who began this Saturday in Riyadh, the first stopover of a journey that will also take him to Israel, the Vatican and the summits of NATO (Brussels) and the G7 ( Sicily).

The first lady and daughter of the Republican ruler were seen Saturday in several official acts in the Saudi capital with the head uncovered, although they wore sober long dresses of dark tonality.

According to the strict dress code of the kingdom, Saudi women should wear the Abaya in public, which is a long and wide robe; And many also hide their hair with the “hijab”, the Islamic handkerchief.

However, it is normal for women who visit the Arab country as part of international delegations not to cover their hair.

This was done, for example, by British Prime Minister Theresa May or German Chancellor Angela Merkel during their respective visits to Saudi Arabia this year.

However, the gesture of Melania and Ivanka Trump has drawn attention in the United States because Trump criticized in 2015 the then first lady of the country, Michelle Obama, not to wear the veil in a view to the kingdom.

“Many people are saying that it is wonderful that Mrs. Obama refuses to wear the veil in Saudi Arabia, but they were insulted. We have enough enemies,” the billionaire wrote in his Twitter account, his favorite social network.

On the contrary, some politicians from his party, like Senator Ted Cruz, then applauded Michelle Obama for “standing up for women in the world.”

Asked by the White House about why Melania and Ivanka Trump chose to wear their hair uncovered, the presidential residence responded that there was no requirement to wear the veil, CNN reported.

On his first day in Riyadh, Trump was entertained by the Saudi King, Salman bin Abdulaziz, who greeted him warmly.

The United States and Saudi Arabia signed a series of agreements in various fields worth $ 380 billion over the next ten years on Saturday.

The focus today is on the speech the US president will make in Riyadh on Islam before Muslim leaders, who will urge the fight against Islamist extremism.

Cardinals win duel of leaders; Diamondbacks return to the path of triumph