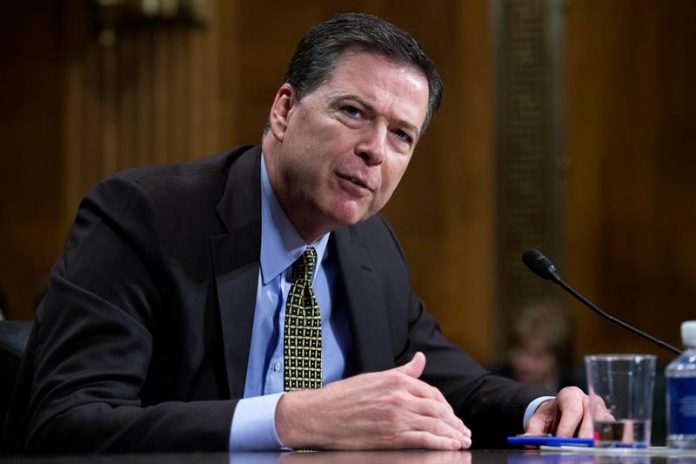 He led the FBI at his own pace and according to his own rules. But on the night of his dismissal, James Comey found that a single man and his rigid principles of independence can not transform a political world governed by tradition and loyalties.

“Independent, first and foremost, independent.” Agent Frank Montoya Junior defines him as Efe, having worked almost a year with him in Washington while advising the Defense Intelligence Agency (DIA) and before Comey himself appointed him head of the branch of the Federal Bureau of Defense. Investigations (FBI) in Seattle.

Montoya also defines the former FBI as a person of “deep integrity” who was tied to his solid principles to guide his actions in the face of any political turbulence.

Repeatedly before Congress and the press, Comey boasted of integrity and independence, virtues that made him go so far as to refuse on one occasion to play basketball with former President Barack Obama for fear of appearing too close To the man who appointed him to the position.

Nevertheless, his character gradually isolated him and his decisions created enemies in different corners of Washington, even within the White House.
During a dinner this week, President Donald Trump asked Comey to “swear allegiance,” a request that the former FBI rejected, and promised that he would always be “honest” with He insisted that it would not be “reliable” in the political sense of the term.

For his part, Trump denies that version of the facts and, in an interview on Fox News, said that at no time asked for “loyalty” to the then director of the FBI.
“He dismissed Comey because he is independent.He was not going to surrender to his feet.It is the idea of ​​honesty versus fidelity.Comey is all for honesty, he is a sincere person, always.His honesty is for the Constitution and that is for What Trump fired him that way, “Montoya told Efe.

To avoid political influence, FBI agents only swear allegiance to the US Constitution, not a president, and in addition, the heads of the agency have a mandate of ten years to be able to exercise their position beyond the maximum of eight years Consecutive for the same president of the USA.

However, in his attempts to remain independent, Comey reaped the rejection of Republican and Democratic lawmakers.

It was first Republicans who criticized Comey for that press conference on July 5, 2016 in which he announced that Hillary Clinton, then White House candidate, would not face charges for his use of a private mail server for Official affairs when she was Secretary of State (2009-2013).

Months later, Democrats charged Comey for sending a notice to Congress, eleven days before the Nov. 8 election, to announce a new investigation into Clinton’s mail, a decision that changed the narrative of the the bell.

When he began his career as head of the FBI, in 2013, Comey had the support of Democrats and Republicans. But the opening of Clinton’s post office investigation created him “enemies” in Washington, a “bitter” city, full of political calculations and much more divided after the election, according to Montoya.

The last pillar left to Comey in his last months as head of the FBI were his own agents. In his farewell letter, he acknowledged that he would “deeply” miss his colleagues and said, “In times of turmoil, the American people must see the FBI as a rock of competition, honesty, and independence.”

The White House says Comey lost the support of the “highest ranks and base” of the FBI, but Montoya denies it and says he had the “respect and admiration” of all agents.

Montoya describes “Jim” Comey as a “very warm” person who used to surprise his agents with phone calls to congratulate them on a police operation that had worked out well, for an investigation that had made its way to the courts or even by birth Of a son.

“Jim would call them on the phone and people, when he took off, would not believe it, they did not think the FBI director was calling them.” There’s a lot of fun stories, like a mechanic we had in Seattle and he hung up because he thought It was a joke, “says Montoya.

Faced with that portrait, in a statement to the newspaper “Politician,” a Justice Department official said Comey was more concerned about protecting his image than defending the credibility of the FBI, an attitude that, in his view, has caused damage ” Huge “and” permanent “wounds in the agency.

“He seemed to think that what was good for him was good for the institution, that’s ridiculous,” said the government official.
Now, Comey is with his wife and friends, according to Montoya, who has spoken with his closest circle. “It will take some time, he is a human being and he has been injured, especially since he can not be part of the FBI, which is something he loved. He is with his family now, he will be well, he is a survivor.”