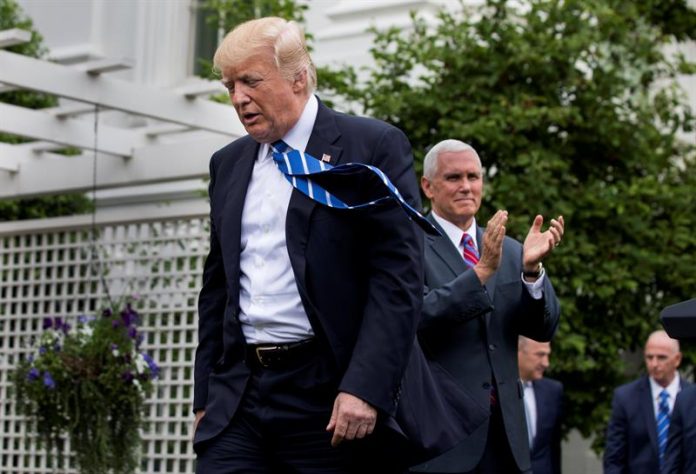 US President Donald Trump on Saturday urged young university students not to give in to criticism and embrace, as he did, the “non-system” label to challenge “failed structures of power,” Not to mention the crisis over the dismissal of former FBI chief James Comey.

After several days of controversy over that decision, fueled by the contradictions of the White House and revelations about a private dinner in which Trump allegedly demanded “loyalty” to Comey, the president moved to Lynchburg (Virginia) today to give a speech At the graduation ceremony of Liberty University, a Christian center.

In his message to recent graduates, Trump did not speak of the crisis unleashed by the dismissal of Comey, who headed the FBI’s investigation into alleged Russian interference in the November US election, but did give some clues as to how Is facing what happened and the criticism he has received.

“Nothing is easier or pathetic than being a critic,” said Trump, for whom the future does not belong to such people, but to “dreamers.”

“Following your convictions means being willing to face the criticism of those who lack the same courage to do the right thing, and know what is right, but do not have the courage, the guts and the resistance to do it,” he argued.

“Take the word ‘impossible’ as nothing but motivation … Enjoy the opportunity to be an outsider,” Trump asked the students.

As an outsider, with no previous political experience, Trump won his rivals last year for the Republican presidential nomination and later won against all odds the election before Democrat Hillary Clinton, and today he emphasized that they are those outside the system, Like him, those who “change the world”.

“We do not need a lesson from (Washington’s political class) about how we live our lives,” Trump also remarked during his speech, the first presiding at a university graduation ceremony.

The president also encouraged the recent graduates to “not surrender” and “never stop fighting for what one believes,” and to “always have the courage” to be oneself and to “challenge entrenched interests and Failed structures of power “.

According to Trump, during his short time in Washington he has been able to see “firsthand how the system is broken” and that there is “a small group of failed voices who think they know and understand everything, and want to tell everyone how Living, what to do and how to think “.

In the United States, “we do not worship the government, we worship God,” Trump said, on the other hand, to students at the Christian university, who promised that, as long as he is president, no one can prevent them from “practicing their faith or preaching What is in their hearts. ”

This week Trump signed an executive order to relax the limits on political activity of churches and other religious organizations.

That order is derived from a promise made by Trump as a presidential candidate and reiterated last February, when he said it would “completely destroy” a 1954 amendment to the law on religious participation by religious groups.

The so-called Johnson Amendment states that religious and other tax-exempt organizations in the United States are not allowed to campaign for or against candidates for political office, and if they do, they risk losing that tax benefit.

Trump can not unilaterally repeal that amendment, something that can only be done by Congress, but in its order instructs the Treasury, on which Internal Revenue Service (IRS, Treasury) depends “to take no action against any individual, temple of faith Or other religious organization “that” talk about moral or political issues from a religious perspective “.

Liberty leader and president Jerry Falwell was one of Trump’s first supporters in last year’s Republican primaries process and today said no other president has done “as much” as he did and so quickly for the benefit of The Christian community.

Trump became the second US president to deliver the speech of the Liberty University graduation ceremony. The first was George H.W. Bush in 1990.