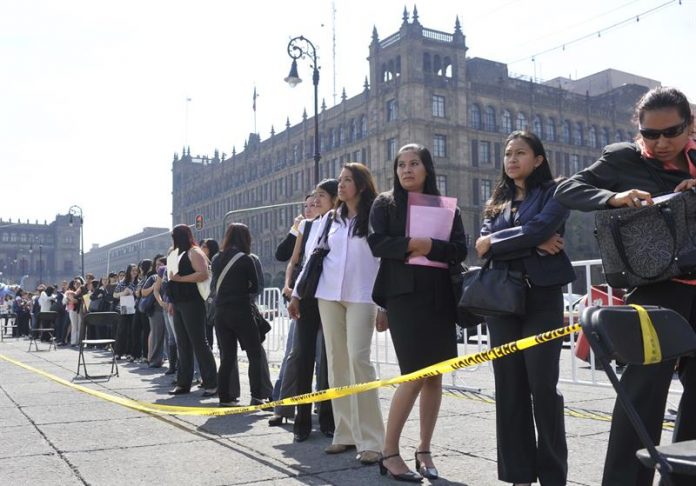 The low salaries, added to the labor precariousness and a high informality, lead millions of Mexicans to a dramatic situation: to work for daily profits that do not allow them to escape from The tentacles of poverty.

“We arrived at a May 1st in a scenario where the precarization of work is growing, stability is lost in employment, we work with wages that in many cases are made up, and with a disjointed unionism,” Efe told the researcher. Institute of Economic Research of the National Autonomous University of Mexico (UNAM), Alfonso Bouzas.

According to data from the National Institute of Statistics and Geography (INEGI), the unemployment rate in Mexico was 3.2% of the economically active population (PEA) last March, its lowest rate for a decade.

However, the underemployed population – the one that needs to work more hours – was 6.5%, and informality reached 56.8%.

One of the main problems is the Mexican minimum wage, one of the lowest in Latin America with 80.04 pesos per day (about US $ 4.25).

This salary “is below the welfare line … In the end, what we see is that in Mexico there is this condition, one can work full time and remain poor,” Oxfam executive director Efe told Efe Mexico, Ricardo Fuentes.

In 2014, this placed 46.2% of Mexicans – 55.3 million – in poverty, two million more than in the study of 2012, according to data from the National Council for the Evaluation of Social Development Policy (Coneval).

“Informality can be a cause of precariousness, but we also have formal jobs that are precarious, because salaries are very low and do not somehow meet basic needs,” said Professor-researcher Graciela Bensusán, from the Universidad Autónoma Metropolitan (UAM).

The minimum wage, linked to prices, tariffs, fines and other variables until January 2016, lost two-thirds of its purchasing power since the 1980s to date, remarked the doctor in Political Science.

For the labor lawyer and economist Arturo Alcalde, one of the biggest problems is that public policies are “not oriented” to promote quality employment, but to promote exports.
This has not benefited a majority because “there are few branches of industry” dedicated to it, and they are not necessarily “connected with the rest.”

In addition, the agreements reached in the North American Free Trade Agreement (NAFTA) on employment, salary and conditions “were not met,” he added.

Neither is the redistribution of profits: “Capital is getting smaller and smaller, and the population is getting less and less,” Bouzas warned.

The most well-known case is that of tycoon Carlos Slim, the sixth richest man in the world in 2017, according to Forbes, with 54.5 billion dollars.

In theory, Mexico has “theoretically high standards” and the right to work is constitutionally recognized, but the legislation has “a very low level of compliance,” he said.

In this context, the specialists consulted consider that the unions do not fulfill their role.
About 9% of the employed population is unionized, a “very low” rate, warns Bensusán, who considers that this is not the biggest problem.

“Worse still is the quality is the quality of this unionization and collective bargaining,” because the union is often chosen by the employer, he said.

Positively, the specialist applauded the “extraordinary” labor reform approved on February 24, although regulations are still lacking.

Among other points, it transposes labor justice from the Executive to the judiciary – with the disappearance of the Conciliation and Arbitration Boards and the creation of courts – also contemplates the secret vote for the election of leaders and favors collective bargaining.
In short, it seeks to promote the rule of law, celebrated Mayor.

Paradoxically, this reform was not born from the Mexican labor sector, but from a demand on the part of the US Government of Barack Obama for the latter’s entry into the Transpacific Association Agreement (TPP).