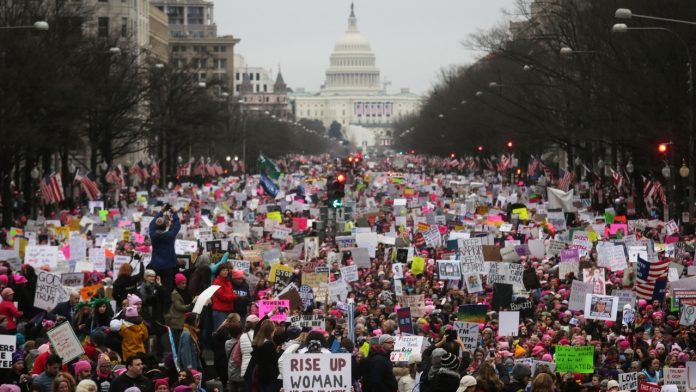 By Scott Malone and Ginger Gibson |

WASHINGTON (Reuters) – Hundreds of thousands of women filled the streets of major American cities to lead an unprecedented wave of international protests against President Donald Trump, mocking and denouncing the new U.S. leader the day after his inauguration.

Women activists, outraged by Trump’s campaign rhetoric and behavior they found to be especially misogynistic, spearheaded scores of marches in the United States and sympathy rallies around the world on Saturday.

The demonstrations also highlighted strong discontent over Trump’s comments and policy positions toward a wide range of groups, including Mexican immigrants, Muslims, the disabled and environmentalists.

In contrast to the heated, often shrill tone of the presidential campaign, and the grim imagery of “American carnage” Trump evoked in his inaugural address, the mood during Saturday’s protests was largely upbeat, even festive.

Chanting such slogans as, “We need a real leader, not a creepy tweeter,” and “Hey-hey, ho-ho, Donald Trump has got to go,” many marchers wore knitted pink cat-eared “pussy hats” in a reference to Trump’s boast, in a 2005 video made public weeks before the election, about grabbing women by the genitals.

While women constituted the bulk of the demonstrators, many were accompanied by husbands, boyfriends and children.

The planned centerpiece of the protests, a Women’s March on Washington, appeared to draw larger crowds than turned out a day earlier to witness Trump’s swearing-in on the steps of the U.S. Capitol.

No official estimates of the turnout were available, but it clearly exceeded the 200,000 marchers projected in advance by organizers, filling long stretches of downtown Washington around the White House and the National Mall.

So-called Sister March organizers estimated 750,000 demonstrators swarmed the streets of Los Angeles, one of the largest of Saturday’s gatherings. Police said the turnout there was as big or bigger than a 2006 pro-immigration march that drew 500,000.

Some 400,000 marchers assembled in New York City, according to Mayor Bill de Blasio, though organizers put the number there at 600,000.

The Chicago event grew so large that organizers staged a rally rather than trying to parade through the city. Police said more than 125,000 people attended, while sponsors estimated the crowd at 200,000, the same tally they reported for Boston, and Denver..

The protests, mostly peaceful, illustrated the depth of division in a country still reeling from the bitterly fought 2016 election campaign. Trump stunned the world by defeating Democrat Hillary Clinton, a former secretary of state and first lady who made history as the first woman nominated for president by a major U.S. political party.

Pam Foyster, a resident of Ridgway, Colorado, said the atmosphere in Washington reminded her of mass protests during the 1960s and ’70s against the Vietnam War and in favor of civil rights and women’s rights.

“I’m 58 years old, and I can’t believe we are having to do this again,” Foyster said.

Although Republicans now control the White House and both houses of Congress, Trump faces entrenched opposition from wide segments of the public, in contrast with the honeymoon period new presidents typically experience when first taking office. In a Twitter post early on Sunday, the new president appeared to downplay the significance of the protests when compared to his victory in the Nov. 8 election.

“Watched protests yesterday but was under the impression that we just had an election!” he tweeted. “Why didn’t these people vote?”

A recent ABC News/Washington Post poll found Trump had the lowest favorability rating of any incoming U.S. president since the 1970s.

Women-led protests against Trump, who has vowed that U.S. policy would be based on the principle of “America first,” also were staged in Sydney, London, Tokyo and other cities across Europe and Asia.

Sister March sponsors boasted some 670 gatherings around the world in solidarity with the Washington event, estimating a global turnout of more than 4.6 million participants tallied through online march registrations, although those numbers could not be independently verified.

Trump, in a Twitter post on Saturday, wrote, “I am honored to serve you, the great American People, as your 45th President of the United States!”

Attending an interfaith service at Washington National Cathedral before visiting the Central Intelligence Agency headquarters, Trump made no mention of the protests.

But he angrily attacked media reports, including photos, showing that crowds at Friday’s inaugural were smaller than those seen in 2009 and 2013, when Barack Obama took the oath of office for his first and second terms as president.

“I made a speech, I looked out, the field was, it looked like a million, million and a half people,” Trump said at his CIA visit. “They showed a field where there were practically nobody standing there.”

Saturday’s march in Washington overwhelmed the city’s Metro subway system, with enormous crowds reported and some stations temporarily forced to turn away riders.

The peaceful atmosphere of Saturday’s march contrasted sharply with unrest the day before, when groups of black-clad anti-establishment activists, among hundreds of anti-Trump protesters, smashed windows, set vehicles on fire and fought with riot police, who responded with stun grenades.

Washington prosecutors said about $100,000 in damage had been done and 230 adults and five minors had been arrested.

Clinton won the popular vote in the Nov. 8 presidential election by around 2.9 million votes and exceeded Trump’s support among women voters by more than 10 percentage points. Trump, however, easily prevailed in the state-by-state Electoral College vote that actually determines the outcome of the race.

Trump offered few if any olive branches to his opponents in his Friday inauguration speech.

“He has never seemed particularly concerned about people who oppose him,” said Neil Levesque, executive director of the New Hampshire Institute of Politics at Saint Anselm College.

But the lawmakers who Trump needs onside to achieve his policy goals may be more sensitive to the show of mass opposition demonstrated by the anti-Trump rallies, Levesque said.

“Members of Congress are very sensitive to the public mood, and many of them are down here this week to see him,” Levesque said.