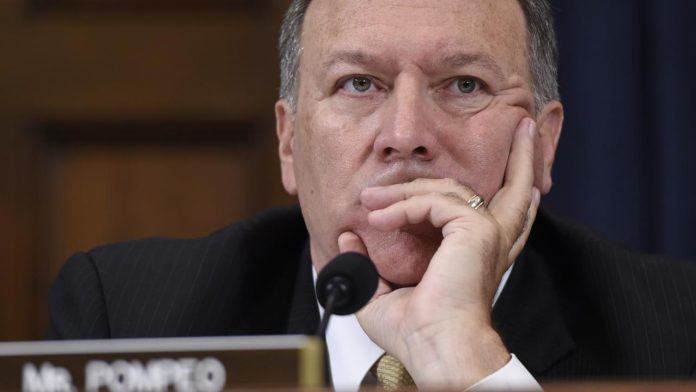 Kansas Rep. Mike Pompeo has been sworn in as the next CIA director.

Vice President Mike Pence is praising Pompeo’s “wealth of experience” and “character.” He says Pompeo is “stepping up to lead the finest intelligence-gathering operation the world has ever seen.”

Pence is speaking at a swearing-in ceremony for Pompeo that comes about an hour after the incoming CIA director was confirmed by the Senate.

Pompeo will lead the nation’s top spy agency at a critical time for U.S. national security and in the aftermath of Russia’s meddling in the U.S. election.

The White House had hoped to have Pompeo in place Friday but Democrats stalled, arguing that his nomination needed more vetting and debate.

Some Democrats objected to Pompeo’s confirmation because of what they described as the Kansas Republican’s inconsistent positions on key issues like surveillance, torture and Russia’s meddling in the 2016 election.

Pompeo will lead the CIA at a critical time for U.S. national security when intelligence — traditionally a nonpartisan issue — has been thrust into the political arena.

Trump has been critical of intelligence agencies’ findings that Russia interfered in the 2016 election with the goal of electing him over Hillary Clinton.

Democrats, in turn, have accused Republicans of rushing through the picks.

Schumer said he pressed Trump at the bipartisan gathering of congressional leaders about “the reasons we needed discussions on nominations and a lot of debate and discussion. Fairly detailed and carefully.”

Sen. John Cornyn of Texas, the No. 2 Senate Republican, says there was talk of “When is Sen. Schumer going to let (Trump’s) Cabinet be confirmed?”

Lawmakers say it was a friendly reception. Schumer says meatballs were served.

Senate Majority Leader Mitch McConnell has informed President Donald Trump that his infrastructure plan needs to be paid for — not added to the debt.

That’s according to the No. 2 Senate Republican, John Cornyn of Texas, who says the exchange happened at a gathering for bipartisan congressional leaders at the White House Monday evening.

Trump discussed a $1 trillion infrastructure plan during the presidential campaign, one of a few areas where his proposals sounded closer to Democrats than Republicans.

According to Cornyn, infrastructure was raised at the meeting as “an area maybe to find common ground and then Sen. McConnell made the important point it needs to be paid for because we’ve got $20 trillion in debt.”

Lawmakers from both parties are admonishing a federal ethics official who sent a series of tweets commenting on President Donald Trump’s potential conflicts of interest.

Members of the House Oversight and Government Reform Committee say the tweets by Walter Shaub Jr., director of the Office of Government Ethics, were inappropriate and could compromise the agency’s objectivity.

In tweets sent in November, Shaub congratulated Trump for agreeing to divest from his business — an agreement Trump had not yet made. Shaub later issued a scathing review of Trump’s plan to turn over control of his business to his sons.

Chaffetz and committee Democrats met with Shaub for more than an hour Monday.

The panel voted along party lines, 11-10, to recommend Rex Tillerson’s nomination to the full Senate, where the former chief executive of Exxon Mobil is almost certain to be confirmed by the Republican-led chamber.

Sen. Bob Corker, the committee’s Republican chairman, says he has “no doubt” Tillerson is well-qualified, citing his leadership of the energy giant.

But Sen. Ben Cardin of Maryland, the panel’s top Democrat, opposed Tillerson. Cardin says Tillerson’s responses to questions about sanctions against Russia and other important global issues sounded more like answers a corporate executive would give instead of a prospective secretary of state.

The top Democrat on the Senate Judiciary Committee will request a delay on the confirmation vote on President Donald Trump’s nominee for attorney general. That will push the panel vote until Jan. 31.

The Judiciary panel is scheduled to vote Tuesday on Sen. Jeff Sessions’ nomination. But committee rules allow any member of the panel to hold a vote over until the next week, and members of both parties frequently do. A spokesman for California Sen. Dianne Feinstein said Monday that she will request the extra week “to give the committee more time to conduct its due diligence.”

At Sessions’ hearing earlier this month, Senate Judiciary Chairman Charles Grassley, R-Iowa, said he looked forward to “moving to his appointment without delay.”

The president’s nominee to run the Small Business Administration will be introduced during her confirmation hearing Tuesday by the two U.S. senators that defeated her in often contentious political races in 2010 and 2012.

That’s a good omen for Linda McMahon, who will be introduced to lawmakers by Connecticut Democratic Sens. Richard Blumenthal and Chris Murphy.

According to her prepared testimony, McMahon plans to emphasize how she and her husband built World Wrestling Entertainment Inc., a sports entertainment company. McMahon says in the company’s early days she had to decide whether to continue leasing a typewriter or she could actually afford to buy it.

The SBA is charged with helping entrepreneurs build and grow businesses.

The Wisconsin Republican says in a statement that Trump “has followed through on his promise to insist on better trade agreements.”

It comes after Trump signed an executive memorandum in the Oval Office Monday to leave the proposed Pacific Rim trade pact. The move was basically a formality since the agreement negotiated by the Obama administration had yet to receive congressional approval and faced significant opposition in the House and Senate.

Still Ryan’s support for Trump’s move was notable since he has long advocated for free trade.

Trump’s move sparked criticism from some other Republicans. Sen. John McCain of Arizona called it “a serious mistake.”

The Senate is on track to confirm President Donald Trump’s pick to run the CIA. Senators are expected to vote on his nomination Monday evening.

Congressman Mike Pompeo is a conservative Republican from Kansas and a member of the House intelligence committee. He faced a mostly no confrontational confirmation hearing earlier this month.

Senate Republicans had hoped to vote on Pompeo’s nomination on Friday, after Trump’s inauguration. But Democrats succeeded in stalling action until they could debate it on Monday.

If confirmed, Pompeo would take the helm at the nation’s top spy agency at a critical time for U.S. national security when intelligence has been thrust into the political arena. It’s traditionally a nonpartisan issue.

The measure by Sens. Bill Cassidy of Louisiana and Susan Collins of Maine represents a retreat from years of Republican calls to repeal Obama’s law and then replace it.

The two lawmakers are pushing their bill as President Donald Trump has pressured Congress to quickly annul the health care law and enact a GOP version.

Trump has said he wants to keep parts of Obama’s overhaul, like requiring insurers to cover people with pre-existing medical problems. He’s not suggested letting states retain the entire statute.

Cassidy said their plan followed the GOP philosophy of shifting some power from Washington to state governments.

The Florida Republican ended nearly two weeks of “will he or won’t he” drama by announcing on his Facebook page that he’ll vote for Rex Tillerson to serve as the nation’s top diplomat.

Rubio says his backing is not without concerns. He worries that in years to come the U.S. “will not give the defense of democracy and human rights the priority they deserve.”

But he says it “would be against our national interests” for Tillerson’s confirmation to be unnecessarily delayed or embroiled in controversy.

Rubio and other members of the Senate Foreign Relations Committee are scheduled to meet Monday afternoon to cast their ballots on Tillerson, the former Exxon Mobil CEO.

The senator clashed with Tillerson at his confirmation hearing earlier this month.

Sen. Ben Cardin of Maryland says in a statement that Rex Tillerson’s business orientation and confirmation hearing answers could compromise his ability to forcefully promote U.S. values and ideals.

Cardin also said the former Exxon Mobil CEO misled the committee about the company’s lobbying against sanctions, such as penalties against Russia for its annexation of Crimea.

The Foreign Relations Committee is scheduled to vote on Tillerson’s nomination on Monday afternoon.

All eyes are on Sen. Marco Rubio of Florida as a Senate committee is poised to vote on President Donald Trump’s nominee to be secretary of state.

The nomination of Rex Tillerson got a boost on Sunday after two influential Republican senators — John McCain of Arizona and Lindsey Graham of South Carolina — offered tepid endorsements of the former Exxon Mobil chief. The focus shifts to the Foreign Relations Committee on Monday afternoon as the members, including Rubio, cast their votes on Tillerson.

Rubio, whom Trump defeated for the GOP presidential nomination last year, clashed with Tillerson at a committee hearing earlier this month. Rubio bridled at his refusal to label Russian President Vladimir Putin a “war criminal” or condemn human rights violations in Saudi Arabia and the Philippines in strong enough terms. He chided Tillerson over the need for “moral clarity.”

The 12:25 p.m. item has been corrected to say that the legislation proposes a new program and does not allow states to design their own.