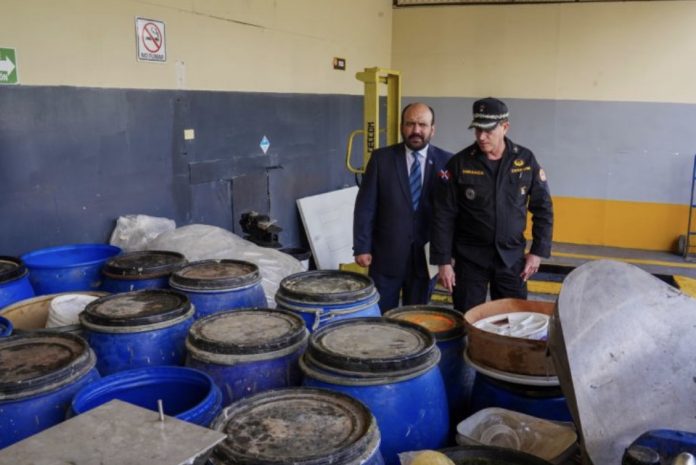 The Specialized Body for the Control of Fuels and Merchandise Trade (CECCOM), together with other authorities, seized around a million counterfeit blood pressure pills and painkillers, which were packed in boxes with logos and emblems of national and foreign pharmaceutical companies. recognized

During the operations that were carried out in conjunction with the Specialized Prosecutor for Crimes and Crimes against Health (PEDECSA) and the General Directorate of Medicines, Food and Health Products (DIGEMAPS), three tons of bulk raw materials were also confiscated, equipment and clothing used for the manufacture and packaging of drugs.

The military intelligence bodies that are part of the Illicit Bureau coordinated by the Ministry of Industry, Commerce and Mipymes (MICM), also seized two firearms of different calibers, 76 tanks, 86 boxes full of pills and 34 machines that were used for mixing, filling, weighing, blistering and labeling products.

The seizures were made during all the simultaneous analyzes of homes and businesses located in East Santo Domingo, the National District and Santiago, which were seized by court orders.

Ramón Pérez Fermín, Vice Minister of Internal Trade of the MICM, assured that the battle against clandestine manufacturing and marketing “does not stop” and that the MICM will continue working to eradicate illicit trade in the Dominican Republic.

He highlighted the Government’s commitment to continue working day by day so that Dominicans acquire medicines without fear of affecting their health and that those responsible for these criminal acts “will be brought to justice.”

Meanwhile, Brigadier General Cesar Miranda, director of CECCOM, added that, with the support of the institutions that make up the Illicit Roundtable, “they will not stop before unscrupulous people who violate Law 17-19 and attempt against life and the health of innocent people.