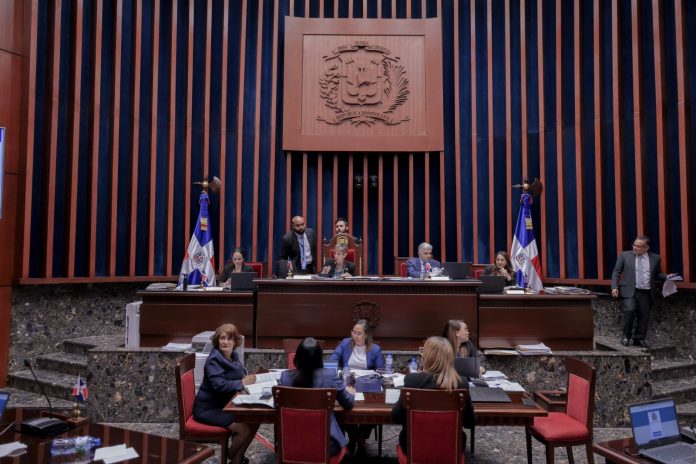 The Senate of the Republic approved in first reading the Bill that modifies article 31 of the Code of Criminal Procedure of the Dominican Republic.
The initiative, proposed by the president of the Upper House, Eduardo Estrella, and the senator from Samaná, Pedro Catrain, has the purpose of modifying the regime of criminal action, by suppressing the criminal type of robbery without violence and without weapons, as a punishable act dependent on a private instance, so that it can be prosecuted ex officio by the Public Ministry.
In other words, the Public Ministry will be able to prosecute the robbery without violence and without weapons, without the need for the victim to file a police complaint, as long as they investigate aimed at preserving the evidence and protecting the interest of the victim.
In this Wednesday’s session, the senators sanctioned in first reading the Organic Law Project of Civil Status Acts.
The regulation, proposed by Senator Dionis Sánchez (Pedernales), aims to establish the provisions that govern the actions and effects of the National Civil Status Registry System, which includes in its articles allowing parents to choose the order of the surnames of their children, also indicates that the names given to newborns can not create confusion with their sex or violate dignity, among others.
Also, the senators sanctioned the Bill Declaring Cevicos as Pineapple Capital. The law, presented by Senator Lic. Ricardo de los Santos, has the purpose of extolling Cevicos for its high production of the fruit.
The senators approved in second reading the Bill Declaring El Seibo as an Ecotourism Province, an initiative presented by the Vice President of the Senate, Santiago José Zorrilla.
The purpose of the piece is to form the Provincial Development Council and create an executive director for it, with the purpose of coordinating the ecotourism development of El Seibo.
Likewise, the Bill that designates with the name of Juan Carlos Maríñez (Jhan Maríñez-La Horma) the baseball stadium of the municipality of Sabana Larga, in the province of San José de Ocoa, was approved in second reading, initiative of Senator José Antonio Castle.
Similarly, they approved the Bill that designates the main building that houses the Ministry of Defense with the name of Ramón Matías Mella, a proposal by Senator Franklin Rodríguez (San Cristóbal).
In the legislative work, the Bill Declaring Espaillat as an Ecotourism Province, a proposal by Senator Carlos Gómez, was also approved.
The regulations intend to ensure the conservation and sustainable use of natural resources, promote and promote ecological tourism and cultural events, to the benefit of the economic and social development of Espaillat.
The senators approved the Resolution that requests President Luis Abinader to instruct the Minister of Education, Roberto Fulcar, to implement measures against the deterioration of the José Manuel Rodríguez Tavares Educational Center, for children with deafblindness and multiple disabilities, and the adaptation or transfer of the Resource Center Educational for Visual Impairment Olga Estrella; Legislative proposal by Senator Faride Raful (National District).
The Resolution requesting the Minister of Public Health, Daniel Rivera, and the President of the National Directorate for Drug Control (DNCD), José Manuel Cabrera Ulloa, to take the necessary measures and actions in order to review Resolution No. . 0011-2018, of May 10, 2018, which includes the prescription of Tramadol, to be excluded from the list of controlled drugs.
The initiative was proposed by Senators Dr. Bautista Rojas Gómez (Sister Mirabal); Lia Diaz Santana (Azua); Franklin Peña (San Pedro de Macorís); Melania Salvador (Bahoruco); Virgilio Cedano (La Altagracia) and Iván Silva (La Romana).
In the same way, the Resolution requesting President Luis Abinader to instruct the Ministry of Housing to renovate the economic dining room of the municipality of Neiba, Bahoruco province, a proposal by Senator Melania Salvador, was approved.
In the session, the Resolution requesting President Luis Abinader to provide in the General State Budget, the installation of economic kitchens in the municipalities of Guayubín and Villa Vásquez, in the province of Montecristi, presented by Senator Ramón Pimentel (Montecristi ).
In addition, they approved the Resolution that asks President Luis Abinader to instruct the Minister of Higher Education, Science and Technology, Franklin García Fermín, the installation of a regional service and coordination office in the Duarte province, proposed by Senator Franklin Romero.
In the legislative work of this Wednesday, the Resolution was approved requesting President Luis Abinader to order the inclusion in the General Budget of the State