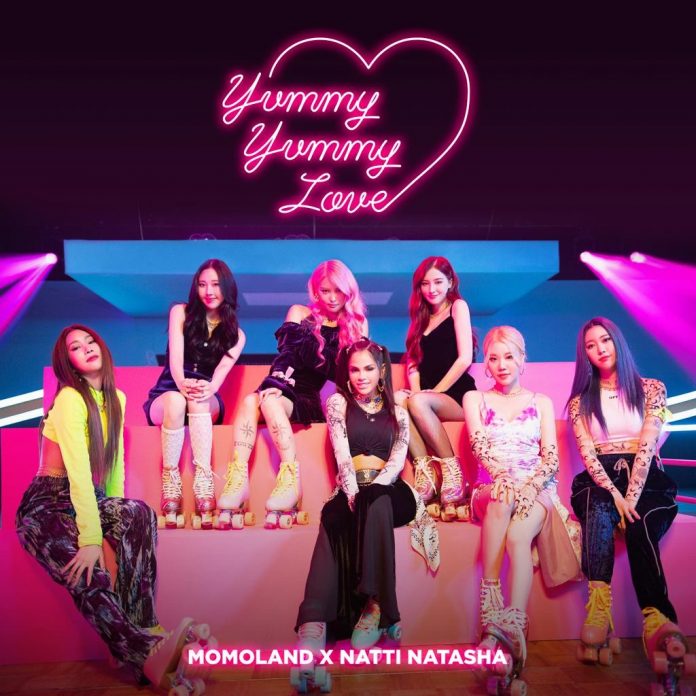 Miami, FL.– Popular South Korean Girl group MOMOLANDannounced last week a new collaboration with Latin Global Star Natti Natasha. In less than 15 hours of its release, their long-awaited single “Yummy Yummy Love”garnered more than 5 Million views, over 20K comments, and 265K likes on Youtube. Since its release, the single has been trending in over 15 countries, including Japan, the Philippines, and South Korea.

“Yummy Yummy Love” tells the start of a blooming first love. Its lyrics “Thinking that you’re into the feeling, so why deny? I can see right through you, I’m on your mind,” to “Are you ready for love like this? Are you ready for your first kiss?” show the girl is aware of the boy’s feelings and is ready to start a new love.

The music video was filmed in both South Korea and Miami. MOMOLAND traveled to Miami last November making an appearance at Natti Natasha’s Everybody Loves NattiAmazon Original Series premiere party, where they met the Dominican star for the first time. Shortly after, they recorded the new video, set a roller-skating rink, a trendy location for a young couple to go on dates.

Natti Natasha was involved in the entire production process of the single and music video “Yummy Yummy Love”. Natti stated, “The reason why I needed to jump on Yummy Yummy Love with MOMOLAND is that I feel like its a positive vibe; it’s feisty, fire and feels sexy. It has absolutely everything you need to feel sexy especially when you’re about to give your first kiss.” Natti added, “I am very happy about this collaboration, especially since it’s a new experience for me. It’s the first time of many, and I hope everyone enjoys it.”

One of the Dominican Republic’s hottest exports, with 84+ million fans across social media and 21+ billion streams across YT, Spotify and Pandora, Natti Natasha is one of the world’s leading Latin female recording artists. She recently achieved unprecedented success with her sophomore album “NattiVidad” and her most recent global hit “Ram Pam Pam” alongside Becky G, which became the No. 1 most listened at radio in the U.S. and Natti’s eighth No. 1 hit single. The song has exceeded 160 million streams on Spotify and over 435 million views on YouTube.

MOMOLAND, which has built a solid overseas fandom with hits like “BAAM”, “Thumbs Up” and “Bboom Bboom” is ready to show fans a new side to themselves. Stay tuned for more from MOMOLAND!