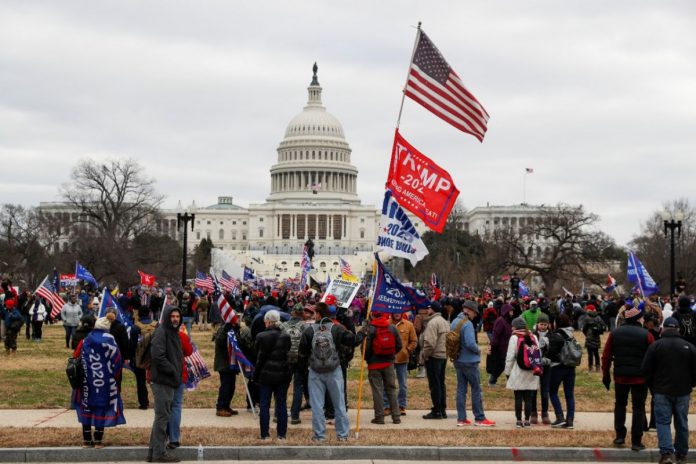 It has been a year since the United States was the scene of one of the most striking episodes that 2021 has left behind, the assault by an eccentric and violent mob of supporters of former President Donald Trump at the heart of its democracy, the Capitol in Washington, and since then the gap continues between Democrats and some Republicans who prefer to look the other way, aware that their aspirations to return to the White House pass again through the tycoon.

While Democrats strive to collect evidence that at least shows the null intentions of former President Trump to curb violent protests that he himself railed moments before during an incendiary speech at the gates of the White House, Republicans, except for a few fallen Unfortunately, they choose to focus the debate on the unfounded accusations of electoral fraud to justify what happened on January 6, 2021.

Since the investigations began, more than 725 people have been indicted by the Justice Department for their involvement in those incidents, some of whom are part of dangerous and heavily armed far-right militias, such as the Proud Boys and Oath Keepers, while the special committee of the House of Representatives has taken statements from dozens of Trump collaborators.

The FBI has pointed out that there are detainees from almost every one of the fifty states that make up the country. The main accusation that the prosecutors have presented is that of illegally entering a restricted place, about 640; while there are 225 people with charges of assault or resistance to authority.

At the moment, some 165 people have pleaded guilty to at least some of the charges against which they have been charged, while 70 have already received a conviction, of which 31 have been imprisoned, including Robert Scott Palmer, punished with the biggest penalty so far, five years behind bars for assaulting several police officers during the riot.

RESEARCH
One of the latest documents, of the more than 35,000 already in the commission’s possession, is a 22-page “strategic communication plan” provided by Bernard Kerik, a former NYPD commissioner and friend of the former attorney from Trump, Rudolph Giuliani, with which to uncover alleged cases of electoral fraud and “educate” and “inspire” public opinion to demand that congressmen not recognize Biden’s triumph.

On the eve of the anniversary of these events, the commission, with the presence of some Republicans such as the repudiated Liz Cheney, is waiting to know if finally the United States Supreme Court will block access to the records of the activities and activities at Trump’s request. meetings that took place those days in the White House.

Trump and his followers have been in charge of hindering the investigations of this commission, taking refuge in the legislative privilege of the first, although some people from his closest circle such as Steve Bannon or the former chief of his cabinet Mark Meadows have already been accused of contempt of the law. Congress.

Now, the commission, which hopes to have its final conclusions ready before the legislative elections in November, hopes to initiate a more public phase of the process, with the dissemination through the media of the following appearances, among which no They rule out that there are those of Trump himself and that of his ‘number two’, Mike Pence.

Meanwhile, the House of Representatives of the United States, with a Democratic majority, plans for this Thursday, January 6, a series of commemorative events, including a vigil and a minute of silence, followed by a meeting with historians in which ” it will preserve the narrative “of what happened and with several congressmen recounting how they lived those hours.

Also President Biden and the Vice President, Kamala Harris, will give a speech from the White House, announced days after former President Trump announced that he would do the same from his mansion in Mar-a-Lago, in Florida, in which such and as it advanced, it will address the parliamentary commission’s attempts to “stay away” from allegations of electoral fraud.

Trump, who has even lashed out furiously at those party colleagues who have not fueled his conspiracy theories, has justified what happened on Capitol Hill as an act against the “insurrection” that occurred in the elections of 3 May. November, a strategy that is expected to be used by Republicans both in this year’s elections and during the 2024 presidential campaign.

“Our party has to choose. We can be loyal to Donald Trump or we can be loyal to the Constitution, but we cannot be loyal to both and right now there are too many Republicans who are trying to help the former president,” said Liz Cheney, vice chair of the commission. investigating the assault and one of the two Republican people present at it.

Despite the words of Cheney and other Republican congressmen, most of the party has tried to downplay what happened and has refused to acknowledge Trump’s complicity in all of this.

The minority leader in the House, Kevin McCarthy, although he is in favor of the full weight of the law falling on the insurgents of that day, has not only always ignored any involvement of the former president, but has also accused the Democrats of using what happened “to further divide” American society.

A year after what happened, American society remains deeply divided regarding what happened and Trump’s degree of responsibility, with more than 70 percent of Republican voters assuring that if the former president had something to do with that episode, it was in small measure, compared to 92 percent of Democrats who blame him entirely.

According to this poll conducted by ‘The Washington Post’ and the University of Maryland, 62 percent of Republican voters say there is evidence of electoral fraud and four out of ten say that violence against the government is justified.

This Thursday marks a year since a mob of supporters of former President Trump stormed the Capitol headquarters in order to boycott the recount of electoral votes that certified his defeat against Biden. At least seven people died in connection with the riots and dozens were injured.