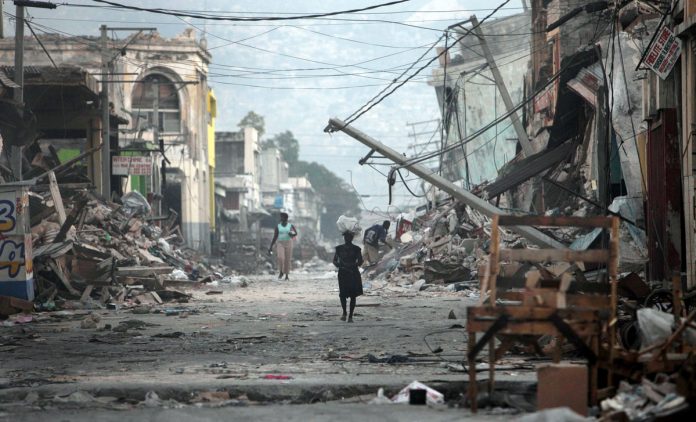 Biden authorizes “immediate” assistance from the United States, as does the neighboring Dominican Republic

The 7.2 magnitude earthquake on the Richter scale that has caused serious damage in Haiti, especially in its western and southern areas, has led to messages of support from foreign governments, including some such as those of the United States and the Dominican Republic. who have already offered to send help.

The North American president, Joe Biden, has authorized an “immediate” response from the United States and has commissioned the head of the cooperation agency (USAID), Samantha Power, to coordinate this work, which would begin in the evaluation phase and go as far as the reconstruction.

“The United States has a close and lasting friendship with the people of Haiti and we will be there after this tragedy,” the White House tenant said in a statement, after acknowledging that the country was already going through “a difficult time.”

From the European Union, the Commissioner for Crisis Management, Janez Lenarcic, has shown the willingness to help. “In light of the devastating earthquake that hit Haiti, the EU activated the Copernicus Emergency Management Service in order to obtain satellite images and prepare maps (of affected regions) for the employees of the Directorate General for Civil Protection and Humanitarian Aid of the EU, as well as for our partners on the ground, “he said on his Twitter account.

The Dominican President, Luis Abinader, has also extended his hand, who has ordered his Foreign Minister to contact the Prime Minister of Haiti, Ariel Henry, “to facilitate any help within our possibilities.”

Abinader has expressed on Twitter his “consternation” at what happened in Haiti, which shares the island of Hispaniola with the Dominican Republic. Despite what was feared at first, the director of the Dominican Emergency Operations Center (COE), Juan Manuel Méndez, has ruled out damage in this country, according to ‘Listín Diario’.

The president of Mexico, Andrés Manuel López Obrador, has ordered various civil and military institutions to “prepare immediate aid” to alleviate the “suffering” in Haiti, in a sentiment shared throughout the Latin American region.

For his part, the president of Chile, Sebastián Piñera, has regretted that, “once again”, Haiti has been “hit by adversity”, with “great damage to its population and infrastructure.” We have contacted its authorities. and we are preparing a shipment of humanitarian aid that they undoubtedly need desperately and urgently, “he added.

His Bolivian counterpart, Luis Arce, also shared on Twitter a message of support for the “Haitian brothers” and offered his condolences for the foreseeable high number of deaths, while wishing a speedy recovery to the injured, although the Authorities in the Caribbean country are still evaluating the exact extent of the personal and material damage.

“Total solidarity” has also come from Peru, through the mouth of its president, Pedro Castillo. “As the government of the region, we will be attentive to provide the necessary support to the sister nation in order to advance in unity and fraternal integration,” he declared.

The Ecuadorian Guillermo Lasso has indicated that his country accompanies Haiti “in these difficult moments”, in the face of a “terrible catastrophe” that anticipates “irreparable losses”, which means remaining “attentive” to a possible request for help.

Also, the president of Colombia, Iván Duque, has shown his “solidarity” with Haiti. “We deeply regret what happened and he has communicated that the Air Force with humanitarian material will move the equipment to the country to” save lives. “

The Argentine Foreign Ministry has shared a statement in which it “expresses deep regret for the human and material losses suffered by the beloved people of Haiti due to an earthquake and is preparing to collaborate in this difficult time.”

The same has been done by Brazil, which has expressed “its solidarity with Haiti and reaffirms its firm commitment to continue with the humanitarian aid provided to that country.”

The Haitian Foreign Minister, Claude Joseph, has thanked the support received in the last hours before the “tragic and painful moment” that the country is going through and has already opened its hand to help, pointing out that the authorities are evaluating the damage with in view of “a rational distribution” of the contributions of “the partners and friends of Haiti.”

HUMANITARIAN SITUATION
The UN Secretary General, António Guterres, has lamented the “tragedy” and offered his condolences to the families and relatives of the victims on behalf of his organization. United Nations, he added, “works to support rescue and relief efforts.”

On everyone’s mind is the 2010 earthquake, when some 200,000 people died. Haiti is already the poorest country in the Western Hemisphere and the United Nations Office for the Coordination of Humanitarian Affairs (IOM) estimates that 4.4 million citizens, more than 40 percent of the population, need help to meet their basic needs. .

The representative of the UN Children’s Fund (UNICEF) in Haiti, Bruno Maes, has been “deeply saddened” by the first information on victims and “heavy damage” and has confirmed the willingness of the agency to collaborate so much with the Government as with other partners and help the affected areas.

UNICEF staff in the south of the country have begun to assess the situation to prioritize this assistance, taking into account that there will be displaced people who will need shelter, clean water or medical attention. Even before this earthquake, the agency estimated that 1.9 million Haitian children needed humanitarian aid.