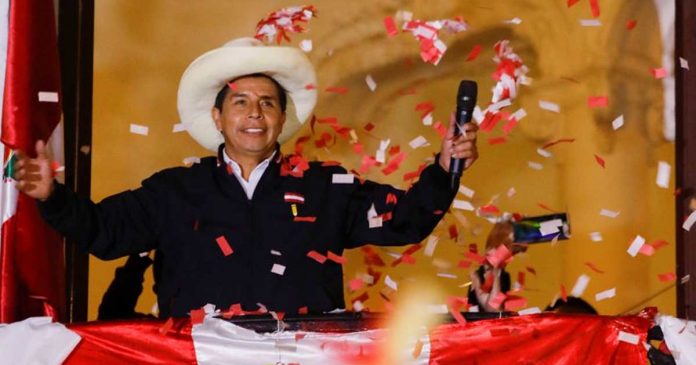 The National Electoral Jury of Peru (JNE) has proclaimed Pedro Castillo as the elected president of the South American country for the period 2021-2026.

In a virtual ceremony that began at 7:00 p.m. (local time), the JNE presented the general act of proclamation, a document that certifies the result in which the leader of Peru Libre has obtained 50.12 percent of the support against the candidate of Fuerza Popular, Keiko Fujimori, who obtained 49.87 percent of the votes.

Specifically, 44,263 votes have given Castillo the victory after the JNE has dismissed hundreds of appeals for annulment of the minutes presented by Fuerza Popular.

In the session, Dina Boluarte was also proclaimed as the first vice president of the country and Castillo himself was present, who will assume the presidency on July 28 when the term of the interim president, Francisco Sagasti, expires.

Next, the president-elect launched a message on his Twitter account in which he thanked the “Peruvian people for this historic triumph.” “The time has come to call on all sectors of society to build together an inclusive Peru, a just Peru, a Free Peru,” he said.

“We call on the Afro, coastal, Andean and Amazonian peoples, the working class and their unions, the native and peasant communities and all of society to do in this beautiful homeland,” he added and remarked that he is looking for a Peru “without discrimination and for the rights of all “.

Likewise, he has given a speech at the headquarters of his party in which he has invited Fujimori to “this space to be a government of all Peruvians, of all bloods, without any discrimination.”

“To Mrs. Fujimori … Let’s not put more obstacles to get ahead, no more obstacles,” he mentioned. He has also addressed the rest of the forces: “Welcome everyone. Bring your experience, but with your loyalty and transparency”, he has qualified.

“Peruvians will create true economic development (…) We will be respectful of the institutional framework of this Constitution by which we have been elected until the people decide,” she has riveted, according to RPP.

For his part, Sagasti has greeted Castillo’s proclamation through his Twitter account. “Let us look with optimism at the future of our country, nine days before the Bicentennial, that this is the beginning of a new stage of reconciliation, consensus and unity,” he said.

Hours before the proclamation, the JNE has announced that it unanimously dismisses the last five appeals presented by Fuerza Popular against the presidential election process and, subsequently, Fujimori has advanced that it would recognize those results, although it has insisted on its allegations of fraud electoral.