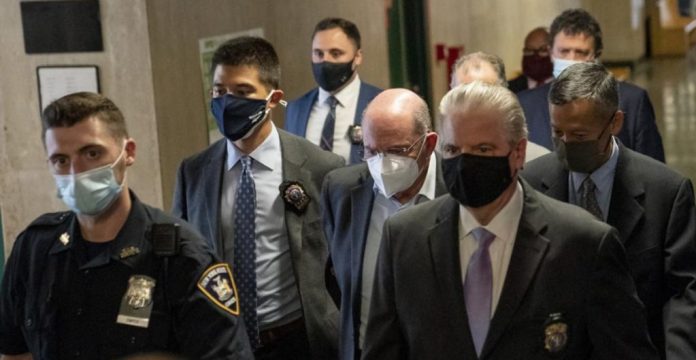 The indictment includes 15 felony counts including fraud, conspiracy and forgery.

Weisselberg, who had turned himself in before the charges against him were revealed, and the Trump Organization plead not guilty.

The Manhattan Prosecutor’s Office has announced this Thursday the charges filed against the Trump Organization, whom it has accused of directing for 15 years a plot to defraud, conspire and falsify business records, to which is added the charge of grand theft, which would reach a tax evasion of up to 1.7 million dollars (about 1.4 million euros).

In total, the indictment includes 15 felony counts that were allegedly committed to “compensate” the organization’s chief financial officer, Allen Weisselberg. Both the Trump Organization, Weisselberg and the Trump Payroll Corporation would have used methods ‘outside the legal limits’ through unpaid taxes to grant benefits to Weisselberg, including an apartment or a company car.

All three defendants have pleaded not guilty. Weisselberg has arrived in court in handcuffs after surrendering himself to the Manhattan District Attorney in the morning before the charges against him and the company were revealed.

Prosecutors have assured that they have accounting and tax records, as well as statements from possible witnesses that would confirm these alleged crimes, while they have accused Weisselberg of having tried to hide his participation in the scheme with the knowledge of the company. The CFO would have concealed all these years that he resided in New York to avoid paying city income taxes.

In this context, prosecutors have asked that Weisselberg’s passport be taken away as there is a risk of flight given the “extensive history of travel by private jet and extensive means to stay out” of the jurisdiction of the Prosecutor’s Office, reports CNN.

Following the request, Weisselberg has been released on his own accord even though he has handed over his passport.

Weisselberg and the Trump Organization were indicted Wednesday for alleged tax offenses by a Manhattan grand jury. Neither former President Donald Trump nor his children are included in the charges, issued as part of the criminal investigation by Manhattan District Attorney Cyrus Vance.

Weisselberg, 73, is a loyal aide to Trump, who has served his family for more than 40 years. In fact, he is the only person not named Trump whom the former president entrusts with his money.

The organization’s financial director has negotiated Trump’s loans, is a co-signer of his accounts, helps to process his taxes and, together with the former president’s children, has supervised the trust that kept all of his assets while he was in The charge.

The Trump Organization is a business conglomerate primarily engaged in the management and development of real estate. Trump was forced to relinquish control of the firm to his sons in 2017 upon assuming the U.S. Presidency, but he has never fully dissociated himself.

“IMPORTANT MARKER” IN CRIMINAL INVESTIGATION
After the indictment, the attorney general of New York, Letitia James, has considered that it is an “important marker” in the ongoing criminal investigation of the Trump and Weisselberg Organization.

“This investigation will continue, and we will follow the facts and the law wherever they lead us,” she said in a statement.