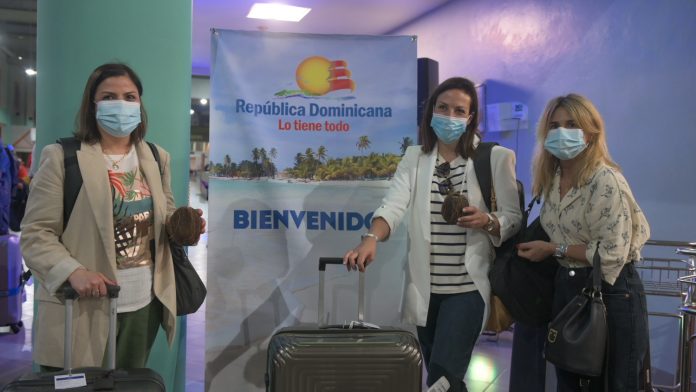 El Catey Airport, Samaná.- In the continuation of the recovery and the sustained growth in the arrival of tourists from Spain to Quisqueaya, 286 leaders of Spanish travel agencies and media arrive in this province in the first Mega Fam Trip “República Dominicana Destino Seguro ”, from the new Soltour Travel Partners Group, the result of the Grupo Piñero and Logitravel Group alliance.

The Mega fam Trip, which chooses Samaná for its endless natural attractions and tourist potential, arrived at this air terminal in a festive reception by Mitur, on Air Europa flight UX335.

The Group of leaders will exhaust a series of tours and activities until Friday 28, which will include the hotels of the Bahía Príncipe chain in Samaná and Punta Cana and aims to reactivate the promotion of tourism for the summer concentrated in these two tourist poles as well how to champion the recovery of the sector.

Karina Font Bernard, director of the Spain-Portugal Tourism Promotion Office (OPT), affirms that it is of great pride for the promotion of tourism in the country to carry out this event to promote the Samaná destination, which has attracted great interest among Spaniards who have the Dominican Republic as their favorite destination to travel.

“With this action of the Ministry of Tourism, and in this case, the Piñero Group, we are going to maintain for this year with a privileged position in the preference of tourists in this market,” she said.

Added to this alliance is Air Europa, which from this first fam trip of Soultour and Grupo Piñero, schedules 11 weekly flights on the Madrid-Samaná route from June 26 to September 4.

Regarding this initiative, Javier Castillo, general director of Soltour, was pleased to celebrate the birth of this new company, in a destination that is highly preferred by Spaniards such as the East and Samaná region and with the promotion and impulse that the peninsula with a weekly frequency by Air Europa starting this summer.

“We understand that we must know how to live with the new situation and we must begin to work with what we know how to do, which is to plan trips and offer our clients new experiences,” said Soltour’s chief executive.

On this trip from Madrid, the main executives of the Bahía Príncipe Resorts & Hotels Consortium arrived, such as its CEO, Antonio Teijeiro; José Antonio Moreno, Director of Operations; Fernando Castillo, Director of Innovation and Development and Lluisa Salord, General Director of Commercial and Sales, among other representatives.

Journalists from different radio and television media and from publications of the tourism sector in Spain and Portugal also arrived.

Among the activities to be developed by this Soltour Mega Fam Trip are visits to the Bahía Príncipe Cayacoa, Samaná, Cayo Levantado and Bávaro hotels, Punta Cana, as well as the coastal towns of Sabana de la Mar and Los Haitises by sea.

They will also receive a training on the process of E-Tickets for the entry and exit of travelers from Mitur in the Convention Hall of the Bahía Príncipe Punta Cana and the Dominican Republic Tourist Destination conference.

Soltour Travel Partners champion under its motto “Let’s Start With You” the new path with which it wants to promote the sector and accompany travel agencies through a project that combines the specialized product of Soltour and its more than 10,000 partners with innovative technology by Smytravel.