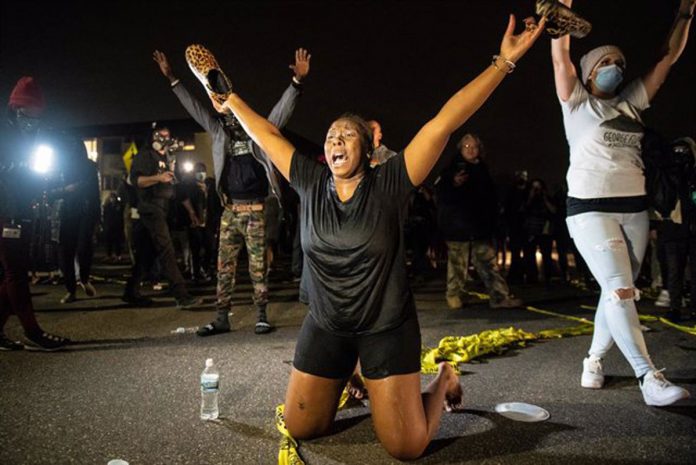 The officer who shot and the Brooklyn Center Police Chief have resigned.

The mayor of Minneapolis, Jacob Frey, has declared a curfew in the city in the wake of the incidents unleashed after the death of African American citizen Daunte Wright at the hands of a police officer.

Since Monday night, starting at 7:00 p.m. (local time), the curfew has entered into force, which has been extended until 6:00 a.m. on Tuesday. This measure is applied after the state of emergency is declared.

However, hundreds of people have defied the curfew by gathering in front of the Brooklyn Center police station demanding justice for the event while police have fired tear gas rubber bullets and stun grenades to disperse the crowd, according to the ‘Star Tribune ‘.

Faced with the events, the colonel of the Minnesota State Patrol, Matt Langer, has said that 40 people have been arrested during the riots, according to ‘The Hill’.

“The anguish we are suffering cannot be translated into violence, destroying livelihoods, destroying locally owned businesses in which our communities have poured their heart and soul for decades,” Minneapolis Mayor Jacob Frey called in a press conference, reports CNN.

“The crumbling of the sacrifices that people have made for so long, cannot, will not be tolerated. We must seek peace tonight,” Frey urged.

Also the mayor of St. Paul, Melvin Carter, has announced that this same curfew will prevail in the municipality, while the governor of Minnesota, Tim Walz, has declared mobility restrictions in three counties – Hennepin, Ramsey and Anoka- -, one of them where Daunte Wright was murdered.

On the other hand, the mayor of the city of Brooklyn Center – where Wright died – Mike Elliott, has reported that his office has assumed the command authority of the Police Department after a vote in the city council, while It has also announced that the municipality manager, Curt Boganey, has been relieved of his duties.

US President Joe Biden has spoken about the death of the African-American citizen through his Twitter account, where he has assured that it is necessary to “rebuild trust and ensure accountability so that no one is above the law “.

“Today I am thinking of Daunte Wright and his family, and the pain, anger and trauma that black America experiences every day,” the president wrote, hours after asking for calm and “wait and see what lies ahead. the investigation”.

Daunte Wright died of a gunshot wound and, according to the Hennepin County Medical Examiner’s Office, the circumstances of the event match that it was a homicide.

The police officer who killed the young African-American this Sunday in Minneapolis has been identified as Kim Potter and would have mistaken her pistol for the taser, according to the camera carried by the police themselves, who recorded what happened. An investigation has been opened by the Minnesota Office of Criminal Detention.

Potter, with 26 years of experience in the Police, has resigned this Tuesday through a statement in which he wanted to emphasize that he has served as a police officer “the best” he could and that this situation came “the best” for the community, the department and their peers, is to “resign immediately.”

“I hope this brings some calm to the community, but I believe that, ultimately, the people want justice, they want full responsibility before the law. That is why we are going to continue working,” said Mayor Elliot, who has advanced that Brooklyn Center Police Chief Tim Gannon will also resign.

Wright’s death has sparked protests against racism and police violence, since in that same city last year the African-American George Floyd died, drowning during a police arrest.