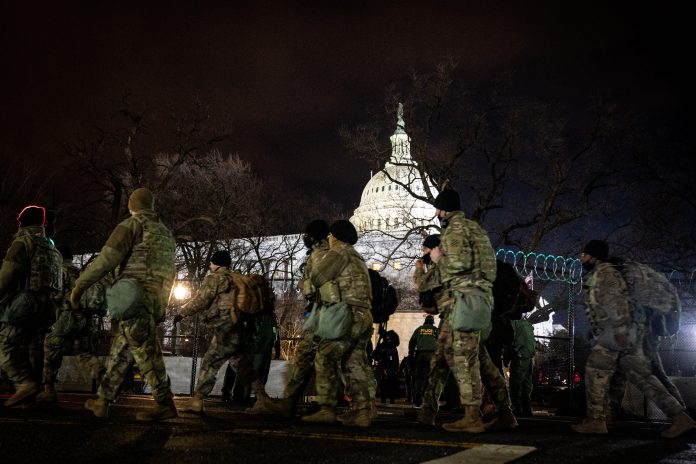 The Secretary of Defense of the United States, Lloyd Austin, approved this Tuesday the request of the Capitol Police to extend the stay in place of 2,300 members of the National Guard, who will stay until May 23 to reinforce security.

However, the reinforcement of the National Guard is reduced by 50 percent compared to today, since there are 5,100 agents who are protecting the seat of the legislative power, reports CNN.

The Pentagon has specified that area officials will work with the Capitol Police to “gradually reduce the footprint of the National Guard as conditions allow.”

“We thank the National Guard for their support throughout this mission, as well as for their important efforts throughout the country to combat the COVID-19 pandemic,” the department led by Austin also underlined in a statement.

The Capitol Police had requested that the presence of the National Guard be extended for two months since, in principle, the members of the body would be in Washington only until March 12.

The police made this request in part because of concerns about possible attacks on the building since alerts were issued a week ago for a “possible plot” by a group of militias to assault the place.

MORE AGENTS AND POWER TO THE POLICE
In fact, General of the Army Russel L. Honore, in charge of carrying out the report on the security in the Capitol after the assault that took place on January 6, has recommended in his conclusions to increase the power of the Chief of Police of the Congress and push for more agent hiring.

Among other measures, Honore has clarified the importance of placing a greater number of fences in the area, especially “in times of crisis” and also carrying out a series of changes in the way in which the different forces of order “interact” in the region.

Last January and after the incident, which was carried out by numerous followers of former President Donald Trump, the Speaker of the House of Representatives, Nancy Pelosi, asked Honore and a working group that “will review how to improve security in the complex of the Capitol “.

Court hearings held over the past two months on the assault have exposed the “inefficiencies” of the Capitol Police, a feeling that remains in Congress in a bipartisan fashion.

Now-former Capitol Police Chief Steven Sund has recalled the difficulties he faced in obtaining approval to achieve the deployment of the National Guard as Trump supporters entered the Capitol, according to information from the network of ABC news.

The report clarifies that the Capitol Police “was insufficiently equipped and poorly trained” to guarantee the safety of the members of the Capitol.

Thus, he suggests adding another 854 agents to perform different functions, including intelligence work. If this measure is approved, the Capitol Police – which already has more than 2,000 members – could become one of the largest departments in the country.

In order to ensure the safety of Congress, agents worked 720,000 overtime in the last fiscal year, a pattern that Honore considers “unsustainable” going forward.